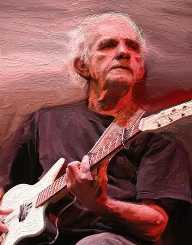 John Weldon "J.J." Cale was born on December 5th, 1938. He was an American singer-songwriter notably known for his signature genre "Tulsa Sound." He first established himself as an artist when he moved to Los Angeles. Although he avoided the spotlight, other acknowledged artists performed covers of his songs which eventually got him into the limelight.

John Weldon "J.J." Cale was born on December 5th, 1938 in Oklahoma. He grew up in Tulsa where he attended Tulsa Central High School. In 1956, he graduated from high school and started learning sound engineering while still at home where he had constructed a home studio.

He later joined the military, and it is here that Cale sharpened his knowledge about electronics. Cale then moved to Los Angeles and handed employment as a studio engineer.

While in Los Angeles, J. J. Cale composed a song, "After Midnight" with Liberty Records. He shared copies of the track with friends, and after little returns from the sales, he decided to go back to Tulsa. Cale, together with Don White formed a band.

He realized his potential on songwriting when he listened to the cover of "After Midnight" in his car. Then followed a serious songwriter who wrote and performed his songs. Some notable musicians who covered his songs included Johnny Cash, Tom Petty, and Santana.

Cale's most significant achievement came when his track, "Crazy Mama" made it to number 22 on the charts. He appeared on many shows throughout the '70s. His lack of fame during the time never disturbed him and always referred to himself as a "musician" and not a performer.

J.J. Cale died on July 26th, 2013 at the age of 74. His death came as a result of a heart attack. Fairwood Music (UK) Ltd. later published his catalog for the world.