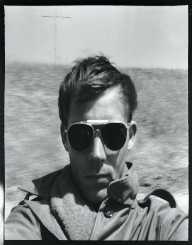 Hunter Stockton Thompson was a prolific American author and journalist who founded the gonzo journalism. Born on July 18, 1937, he gained international recognition for his work Hell’s Angels: The Strange and Terrible Saga of the Outlaw Motorcycle Gangs in 1967. Thompson had to spend about a year riding with the Angels, to experience their life and get first-hand information about them. He became a countercultural figure with his new style of journalism, which he called Gonzo after the publication of The Kentucky Derby Is Decadent and Depraved. Gonzo, is a style of journalism in which the reporter effectively takes part in an action and at the end becomes central figures in their stories.

In 1971, Thompson published his famous work, Fear, and Loathing in Las Vegas: A Savage Journey to the Heart of the American, which reflects on the failure of the counterculture movement in the 1960s. The film version of the book was released in 1998, directed by Terry Gilliam, starring Johnny Depp and Benicio del Toro. In 1971, he unsuccessfully contested on the ticket of Freak Power for sheriff of Pitkin County, Colorado. Thompson committed suicide at age 67 after a series of health problems.

Hunter S. Thompson was born to Jack Robert Thompson and Virginia Ray Davison on July 18, 1937, at Louisville, Kentucky. He was the eldest of three with his sibling being Davison Wheeler and James Garnet and half-brother, James Thompson. The family moved to 2437 Ransdell Avenue in the neighborhood of Cherokee Triangle in The Highlands when Thompson was six years. Thompson had his education at I, N Bloom Elementary School. While there, he developed an interest in sports and therefore co-founded the Hawk Athletic Club and was therefore invited to join Louisville’s Castlewood Athletic Club where he excelled in baseball. At age 14, he lost his father to myasthenia gravis; hence, his mother took charge of their upbringing working as a librarian. Virginia, however, became a heavy drinker after her husband’s death. He continued his education at Highland Middle School and later joined the Atherton High School.

In 1952, he gained a transfer from Atherton to join Louisville Male High School and that same year was accepted into the Athenaeum Literary Association, a literary and social club. Thompson contributed articles to the club’s yearbook The Spectator after becoming a member but was removed from the group in 1955 for his legal problems. Thompson had been charged with accessory to robbery for being in a car with the perpetrator. He was sentenced to 60 days in the Jefferson County jail in Kentucky and was refused to sit for his high school final exams so could not graduate. He was released after serving 31 days and just a week after, joined the United States Air Force.

Thompson had his basic military training at Lackland Air Force Base in San Antonio, Texas after which he studied electronics at Scott Air Force Base in Belleville, Illinois. He later applied to the Air Force aviation-cadet program to become an aviator but was rejected. He was transferred to Eglin Air Force Base in 1956, during which he enrolled for evening classes at Florida State University. It was during his time at Eglin that he had his first professional writing job with The Command Courier as sports editor. He also gained a position as a columnist for The Playground News, in Fort Walton Beach, Florida in 1957. Nonetheless, he could not use his name for his column because airmen in the Air Force were not allowed to hold other jobs. In 1957, he was discharged as an Airman First Class.

Thompson worked as sports editor for a newspaper in Jersey Shore, Pennsylvania after his military service. He later left for New York where he audited courses at the Columbia University School of General Studies and briefly worked with Times as a copy boy. After times fired him for insubordination, he worked as a reporter for The Middle Daily Record in Middletown. He was later sacked for damaging an office candy machine and arguing with an advertiser of the paper. In 1960, he picked a job with the sporting magazine El Sportivo in San Juan, Puerto Rico but the magazine soon folded up. Upon his return, he worked as a security guard and caretaker of Big Sur and eventually wrote two novels Prince Jellyfish and The RunDiary, which was published in 1998.

He also worked for the National Observer until 1965. He later wrote for Rolling Stone magazine. Thompson lived for a year among the Hells Angels motorcycle club in California and that resulted in his work Hell’s Angels: The Strange and Terrible Saga of the Outlaw Motorcycle Gang in 1996. In 1972, he completed his book Fear and Loathing in Las Vegas in fulfillment of a contract signed with Random House.

Thompson wrote the article The Kentucky Derby Is Decadent and Depraved for magazine Scanlan’s Monthly. He employed the Gonzo journalism technique while writing the article and he would use the style in many other works. In 1980, the film adaption of his book Where the Buffalo Roam was released starring Bill Murray. His work The RunDiary was published in 1998 followed by the film adaptation of Fear and Loathing in Las Vegas. In 2003, he released the memoir, Kingdom of Fear: Loathsome Secrets of a Star-Crossed Child In the Final Day of the American Century.

Hunter Stockton Thompson was married to Sandra Dawn Conklin on May 19, 1963. The couple had three children, a son Juan Fitzgerald Thompson and two others who did not survive infancy. They two divorced in 1980. He then married his assistant Anita Bejmuk in 2003. Hunter Thompson died on February 20, 2005, by shooting himself in the head, at his home in Owl Farm in Woody Creek, Colorado. He had been raising concerns about his fraying health and complications from a hip replacement. He was cremated with his ashes fired from a cannon as per his will.