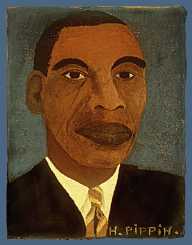 Horace Pippin was a self-taught black-American known for his paintings on the injustice, slavery, and segregations in the United States. Born on February 22, 1888, in West Chester, Pennsylvania, he started painting as a child. Even though he lost his right arm, it did not deter him from painting. Pippin attended segregated schools until he was 15 years. With no one to look after his mother financially since she was in poor health, he had to neglect school at an early stage to work for the livelihood for both himself and his mother. Most of his paintings were dominated by segregated figures. He was a military leader, painter, and warrior. His painting works include Christ and the Woman of Samaria, and John Brown Going to his Hanging.

Horace Pippin was born on  February 22, 1888, in West Chester, Pennsylvania and raised in Goshen, New York. He started his education at in a segregated school until dropping out at the age of 15. He had to quit school to work and help his ailing mother. Growing up, he gained interest in artworks and won a set of crayons and watercolours after at a contest. He picked several jobs after dropping out of school including as hotel porter and used clothing peddler to take care of his mother. He was a staunch member of St. John’s African Union Methodist Protestant Church. He won accolades from his craftsmanship even with limited tools. As a young boy, he made drawings of racehorses and jockeys from Goshen's famous racetrack.

Horace Pippin joined the army to fight in France during the World War I, serving in the 3rd Battalion of the 369th infantry, the famous Harlem Hell fighters in Europe. During the war, a sniper shot him in the right arm and therefore he lost its usefulness. He had this to say of the war“I did not care what or where I went. I asked God to help me, and he did so. And that is the way I came through that terrible and Hellish place. For the whole battlefield was hell, so it was no place for any human being to be.” He made several illustrations of and jotted his war experience.

Horace Pippin started painting somewhere in the 1930s despite losing the use of his right arm. He was a self-taught artist despite his limitations and was featured in publications like Newsweek and Vogue. His first oil painting, The End of the War: Starting Home was in 1930. He was known for his own textured self-portraits painting and biblical paintings like Christ and the Woman of Samaria (1940). His themes for his painting works were memories of his childhood, everyday scene, war experiences, and landscapes.

With his work often categorized as folk art, Horace Pippin portrayed scenes of African-American life as seen in Domino players (1943) and Harmonizing (1944). His self – a portrait painted in 1941, became one of his famous paintings. In 1942, he painted John Brown Going to his Hanging which is among the collection of the Pennsylvania Academy of Fine Arts, Philadelphia.

Horace Pippin has about 140 painting works to his credit. In 1943, he painted Domino Players, which is in the Philips Collection, Washington DC. Other works include Three Soldiers on March and Soldiers with Gas Masks in Trench, which reflects his wartime experience. As his popularity increased nationwide, he embarked on several solo exhibitions including at the Carlen Gallery, Arts Club of Chicago, 1941, and the San Francisco Museum of Modern Arts, 1942. Pippin’s last painting work was Man on a Beach in 1946. His works can be found in the Metropolitan Museum of Art, New York; Hirschhorn Museum and Sculpture Garden, Washington, D.C. and the Pennsylvania Academy of the Fine Arts, Philadelphia among others.

In 1920, Horace Pippin married his long-term girlfriend, Jennie Wade. The couple has one child. He passed-on on July 6, 1946, from a stroke at West Chester, Pennsylvania where he was born. His wife also died shortly after that. Major exhibitions of his work have been curated after his death at institutions like the Pennsylvania Academy of the Fine Arts and the Metropolitan Museum of Arts.