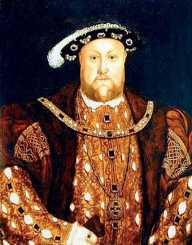 Henry VIII was once the King of England after succeeding his father, Henry VII. He took over as the king of England from April 21st, 1509 to the time of his demise. He was the second ruler of the Tudor dynasty. He was an arrogant and a dictatorial leader who brought numerous changes at the time of his tyranny. During this period, he also expanded his royal power. He was also remembered as the king who took control of the Church of England. He later gave himself the position of Supreme Head of the Church of England’s leader.

Henry VIII was born on June 28th, 1491. At the time of his birth, he was given the name Henry Tudor. He was born in Greenwich at the Palace of Placentia situated in Kent. He was the third born child of his father, Henry VII and his mother Elizabeth of York. He was born in a family of six children. Henry VIII had been born as the second son of the king, and therefore he was not the first heir to his father’s throne.

Two years after his birth, Henry VIII was chosen as the Dover Castle’s Constable and was also to act as Lord Warden of the Confederation of Cinque Ports. Moments later, he was also crowned as England’s Earl Marshal. When Henry was aged three, he became the Lord Lieutenant of Ireland.
Over the coming few years, he first got his induction into the Order of Bath and after that earned several positions.

Some of the roles that Henry VIII took included becoming the Duke of York, Warden of the Scottish Marches, and Order of the Garter (1495). Growing up, he was given the best form of education which contributed to his fluency in both French and Latin. He also took some Italian lessons.

Tragedy struck Henry VII’s family as his eldest son passed away in 1502. He had succumbed to sweating sickness. This was just five months after he had married Catherine of Aragon. The death of Author automatically made Henry the next heir to his father’s throne. He had to be trained on some of the basic tasks that were expected of him.

To maintain the good alliance that Henry VII had with Spain, he had to offer his son to marry his late brother’s wife, Catherine. On June 23rd, 1503, they signed a treaty that sealed their marriage.

Henry VIII coronation occurred when he was still a teenager. As a result, he relied heavily on Thomas Wolsey’s supervision in learning to take the footsteps of his father, Henry VII. This also had a positive impact on Wolsey’s role in England as he was later crowned Lord Chancellor.

Henry quickly took over his father’s throne upon his death in 1509. At this time, he was only 17 years old and was made the King of England on April 21st, 1509. Soon after the death of his father, he made his father’s wishes come true by marrying Catherine of Aragon. Because Henry still depended on Wolsey’s assistance, his first mission was to try and bring French territories to become part of England.

Shortly after, Henry VIII declared war on France in 1512. However, their initial hits were not successful, and they resorted to giving it a try the following year. In 1513, England invaded France and emerged victorious in their second mission. Their triumph occurred at the Battle of the Spurs. With time, they also conquered Tournai and Thérouanne.

Learning of the King’s absence, James IV of Scotland tried to attack England. Nonetheless, the Queen, Catherine defended their territories at the Battle of Flodden where they defeated the Scots. The Scottish king died in this battle.

Later, in 1521, Henry VIII partnered with Charles of Austria with the hope that he would link his ties with the French. However, after Charles triumph over King Francis I of France, Henry noticed that his ambitions would not be attained and therefore withdrew from an agreement he initially made. In 1525, he signed the Treaty of the More.

After a few years, in 1534, Henry VIII thrust himself into the post of Supreme Head of the Church of England. This led to protests over his religious policies. However, the protesters were captured and executed thereby suppressing any oppositions. Henry later ensured that the Church of England segregated itself from the Pope. This was a move that he was remembered for throughout his tyranny. Again, there was an uproar guided by Robert Aske, but as Henry always did, he executed him and his 200 followers.

Henry VIII got married six times. After his marriage to Catherine, he quickly divorced her for having failed to give him a son. They had one daughter in this relationship. His second marriage was to Anne Boleyn. She was his mistress. This affair also led to the birth of their daughter. Henry was disappointed and alleged that Boleyn had been adulterous and therefore had her killed.

In just a day after executing Boleyn, he wedded Jane Seymour. Jane gave him a son. Unfortunately, she passed away following a troublesome pregnancy moments later. In 1540, Henry wedded Anne of Cleves. This marriage was cancelled in just six months as he found her unattractive. More afterward, Henry married Catherine Howard. This marriage was not successful as there were rumors that Howard was cheating behind his back. She was therefore beheaded.

Henry VIII died on January 28th, 1547. Edward, succeed him into his throne.