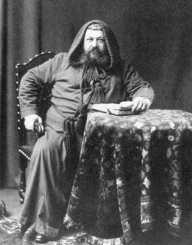 American architect Henry Hobson Richardson was born on the 29 September 1838.

Richardson studied engineering at Harvard University before switching to a career in architecture. Because no developmental degree courses were available in the United States at the time, Richardson moved to Paris. There he studied for a degree in design at the Ecole des Beaux-Arts (1860-1862).

When Richardson returned to the United States, he established an architectural practice in New York City. He won commissions almost immediately and began designing some iconic buildings. His style became known as Richardsonian Romanesque which describes the revival and alteration of Romanesque architecture that he created. This method included features of French, Spanish and Italian Romanesque design with rounded arches atop short, squat columns carved out of rusticated stone.

Richardson is acknowledged as the forerunner of American architects such as Frank Lloyd Wright and Louis Sullivan.

Richardson died at age 48 while at the peak of his career.