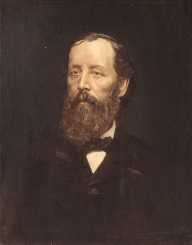 Henry Adams was an eminent historian and novelist. He is famous for his book Democracy an American novel and Mont-Saint-Michel and Chartres.

Henry Adams received the Pulitzer Prize in 1919 posthumously for his book The Education of Henry Adams. He was a freelance political journalist. During his career as an academician at Harvard University, he brought about many changes.

Henry Adams was born in Boston on 16th Feb 1838. He belonged to one of America’s most eminent families. His father Charles Francis Adams Sr. was a politician. His paternal father John Quincy Adams was a U.S. President. His great-grandfather John Adams also a US President was one of the founding fathers of America. Another grandfather Nathaniel Gorham signed the Constitution.

Henry Adams was a voracious reader, and the well-stocked family library was a continuous source of delight. Through reading, he acquired knowledge in many subjects like Greek & Roman literature, Politics, Physics, Astronomy, and Mathematics.

Henry Adams also learned a lot when he traveled with his father. He became aware of slavery when he toured Maryland, Virginia, and Washington with his father in 1850. This left a deep impact on his mind. He and his family opposed it strongly.

In 1854 he graduated from a private Latin school in Boston and took admission at Harvard University. After graduation, he studied Law at Berlin University in Germany. He later traveled around Europe for two years, a normal practice of youth in those days.

In 1860 when Henry Adams returned to the US, his father was elected to the Senate. He served as a secretary to his father at the latter’s request. In 1861 His father was appointed as US ambassador to the United Kingdom.

Henry Adams accompanied his father. It was in the UK that he first ventured into the field of journalism. He was the anonymous London correspondent for the New York Times. In Britain, he was also impressed by the works of John Stuart Mills Consideration on Representative Government.

When he returned to the US in 1868, Henry Adams began working as a journalist. He aimed to expose corruption in politics. He earned the reputation of a reformer through his many published articles. He wrote many articles on the Panic of 1893 and gold standard. He also received critical acclaim for his views on financial issues.

Henry Adams was heartbroken on the death of his sister in 1870 and later accepted the offer of Assistant Professor of History in Harvard. He was an innovative teacher and brought about changes.

Henry Adams introduced the Seminar system and evaluation by students. He also promoted the study of American History. He resigned in 1877 and moved to Washington and started writing and publishing many of his works.

Henry Adams published Democracy an American Novel anonymously in 1880. His discussed the misuse of political power. In 1884 he released the book Esther-A novel. This was written under the pseudonym, Frances Snow Compton. It is a witty narrative of a young socialite. History of United States of America (1801 – 1817) was published in 9volumes by Henry Adams between 1889 and 1891. It gives an account of the administrative system of President Thomas Jefferson and James Madison.

Henry Adams published Memoirs of Marau Taaroa Last queen of Tahiti in 1893. In 1907 The Education of Henry Adams was circulated at his own expense to his close friends. Only after his death was this book made available to the public. It received the Pulitzer Prize in 1919.

Henry Adams married Clover Hooper on 27 June 1893.His wife, however, committed suicide in 1885. There was a family history of depression, and her suicide was said to be caused by severe depression. Henry Adams depended more on his friends and traveled widely.

Elizabeth Cameron, the wife of a senator, became his emotional confidante.  He suffered a stroke in 1912 and was partially paralyzed. He died on 27 Mar 1918 and was buried beside his wife at Rock Creek Cemetery.