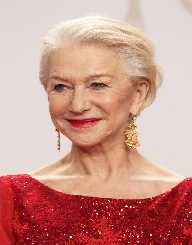 Helen Mirren was born 26th July 1945, to Vasily and Kathleen Mironoff. She was born in Hammersmith, London, in the United Kingdom. Mirren had two siblings, an older sister, and a younger brother.

Her grandfather was in the Imperial Russian Army, and he got stranded in Britain during the Russian Revolution. He became a cab driver to look after his family, and they stayed in Britain instead of trying to get back to Russia.

Helen Mirren'sfather changed the family name from Mironov to Helen Mirren in the 1950s. He performed for some time as a viola player, but eventually went into cab driving and then became an employee in the Ministry of Transport.

Helen Mirren studied at St. Bernard’s High School for Girls, and from there continued her study at the New College of Speech and Drama in London. Right through her schooling years, from primary school onwards, Mirren was involved in acting in her school productions.

Helen Mirren was accepted into the National Youth Theatre when she was 18. A short time later she took the role of Cleopatra in a production of Antony and Cleopatra, and soon after that, she signed with an agent, Al Parker.

Helen Mirren has had a prolific career both on stage and in film and television.

Due to her outstanding work with the National Youth Theatre, Mirren was invited to join the Royal Shakespeare Company (RSC). Her first production with the RSC was The Revenger’s Tragedy, in 1966.

Helen Mirren was cast in many productions between 1966 and 2013, in productions that played in the West End, London, and Broadway, amongst others in theatre locations.

Helen Mirren has also starred on television, one of her most popular shows taking the role of a detective in Prime Suspect, which ran from 1991 to 2006.

She has acted or appeared in over 25 television shows or movies, including, The Twilight Zone, Saturday Night Live, and The Painted Lady.

Helen Mirren released her autobiography in 2007, called, In the Frame: My Life in Words and Pictures. Different from normal autobiographies, Mirren’s book is largely based on pictures from her collection that she has gathered over the years.

Ed of someone with a career like Mirren’s, she has been nominated for over 120 awards, and won 67 of them to date. Her wins include an Academy Award, three Golden Globes, four Emmys, and four Satellite Awards.

She has a star on the Hollywood Walk of Fame, which she was awarded in 2013.

Helen Mirren was made a Dame Commander of the Most Excellent Order of the British Empire (DBE) in 2003.

1997, Helen Mirren married Taylor Hackford, an American director. The couple had been together since 1986. They have two children from Hackford’s first marriage, but no children together. Mirren admits to not being interested in having children.