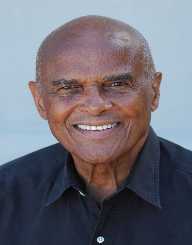 Harry Belafonte is an African-American actor, singer, songwriter and social activist born on March 1st, 1927.  He is among the best and accomplished pop stars ever in history. He is best referred to as the King of Calypso and best known for his song "The Banana Boat Song." During the second world war, he participated as part of the Navy. Later after the war ended, he landed a job in New York City as a janitor.

Besides his music career, Harry has acted in films such as White Man's Burden along with John Travolta. As a social activist, he was a great vocal critic of the former president of America, President George W. Bush. Also, Harry is a humanitarian activist exhibited by his support for humanitarian activities. He participated in the campaign against HIV/AIDS in 2001 which took place in 2001 among other philanthropic events.

Harry Belafonte was born on March 1st, 1927. His place of birth was in Harlem, New York in the United States of America. He is the son of Jamaican born parents, a housekeeper Melvine and chef Harold Bellanfant. From 1932 to 1940, Harry was brought up in a native village in Jamaica by his grandmother.

Harry Belafonte later rejoined New York City after around eight years in Jamaica. He then joined George Washington High School. After that, he was inducted into the Navy to serve his country during the Second World War. Later in the 1940s, he was employed in New York as an assistant Janitor.  Towards the fall of the 1940s, Harry took acting classes in The New School’s Dramatic Workshop in New York.

In the 1950s, Harry Belafonte was in love with traditional folk songs. His debut act on the Broadway was in 1953. He later took part in John Murray Anderson's Almanac earned himself a Tony Award. In 1955, he also appeared in 3 for Tonight, a hit musical. The following year, he released his album Calypso.

Harry Belafonte released his movie Buck and the Preacher in 1972 and Uptown Saturday Night with the help of Sidney Poitier, his longtime friend.  He also made frequent TV appearances in the 1970s and 1980s including The Muppet Show.

In the 1990s, he starred in White Man's Burden along with John Travolta. Later in 2006, he featured in Bobby.

Harry Belafonte is not only a political activist but a humanitarian activist as well, always outspoken. In the 1980s, the great philanthropist was the leader of a project to help African people. He organized a song to be recorded then sold and its revenue used for famine relief in Africa. This is how "We Are the World" song written by Lionel Ritchie, and Michael Jackson came into being.  The song featured great artists such as Diana Ross, Ray Charles, Smokey Robinson and Bruce Springsteen. It was then released in 1985 and immediately became an international hit, raising millions of dollars.

Additionally, Harry Belafonte is also a great supporter of UNICEF as its goodwill ambassador. He also advocated greatly against the actions of the US military actions that took place in Iraq. However, his candidly expressed opinions have landed him in hot soup sometimes. This is especially during the time of President George W. Bush. He frequently made headlines with his bold remarks such as referring to Bush as "the greatest terrorist in the world."

In 1948, Harry Belafonte exchanged wedding vows with Marguerite Byrd. They had two daughters namely Adrienne and Shari before divorcing in 1957. In the same year, Harry Belafonte married for the second time, this time to Julie Robinson. She was Katherine Dunham Company’s former dancer. Together they had two children: David and Gina. This second marriage also ended in a divorce upon which Harry Belafonte wedded Pamela Frank, a photographer.