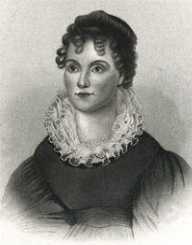 Hannah Hoes was born 8th March 1783, to Johannes and Maria Hoes. She was born in Kinderhook, New York, in the United States.

Van Buren came from a Dutch background, and so did her husband-to-be, Martin Van Buren. The couple was distant cousins, and they also became childhood sweethearts.

In February 1807, the couple married. The couple had five children during the next ten years, although one died in infancy.

Van Buren died in 1819 from tuberculosis. Her husband, Martin Van Buren, became the eighth President of the United States. He moved into the White House as a widower with four sons. He never remarried.

Martin's eldest son married a woman called Angelica Singleton. As a result of their marriage, Singleton filled the role of hostess for the President at the White House.