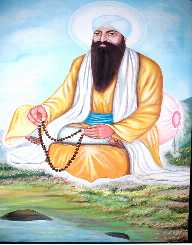 Guru Arjan was born 15th April 1563, to Guru Ram Das, and Bibi Bhani. He was born in Goindval, in the Mughal Empire, currently known as India. His father was the fourth Sikh Guru, and his mother was the daughter of DasGuru Amar.

He had two older brothers, Prithi Chand and Mahadev. He grew up in Goindval where he was born, and at age 11, went to Ramdaspur where he spent the next seven years of his life with his father. As part of Sikh tradition, he spent two years in Lahore, establishing a Sikh congregation.

Guru Arjan was selected by his father to be the Fifth Guru. The middle brother, Mahadev, became an ascetic, to live a frugal life of spiritualism. The eldest brother, Prithi Chand, wanted to be the successor and tried unsuccessfully to discredit Guru Arjan when he realized Guru Arjan was going to be chosen as the next Guru.

Guru Arjan was appointed the Fifth Guru in 1581, upon the death of his father. He was 18 years old. He was the leader of the Sikhs for 25 years and achieved much during his reign.

Guru Arjan established three towns – Tarn Taran, Kartarpur, and Sri Hargobindpur. He also completed the building of Darbar Sahib at Amritsar, which had been founded by his father. It was also known as Harmandir Sahib or the Golden Temple. Once Guru Arjan had completed the Adi Granth, he installed it at the Temple.

He also extended trading into Afghanistan and further afield.

Guru Arjan compiled hymns from earlier Gurus and established the first edition of the Sikh scriptures, which was called the Adi Granth. Guru Arjan also wrote many scriptures himself. He compiled the Adi Granth as disputes were starting to arise about different hymns in circulation, some named as fake, and he wanted to establish an official scripture.

He introduced tithing, by recommending that Sikhs donate a tenth of their income where possible. The Masands, who had been established by Guru Arjan’s father, collected the funds, and also taught the Sikh belief system, and settled any civil disputes that arose.

Guru Arjan was arrested by the Mughal Emperor, Jahangir. The growing popularity of Guru Arjan, and, in turn, the Sikhs, was a concern for the emperor. The emperor wanted him to convert to Islam, but he refused to do so. He was tortured and eventually executed in 1606. This made Guru Arjan the first martyr of the Sikh faith. His martyrdom is remembered every year on 16th June.

Guru Arjan Dev married Mata Ganga. Hargobind was their only child and succeeded his father as the Sixth Guru.

Guru Arjan instructed his son and the Sikh people to take up arms and defend themselves against Islam.