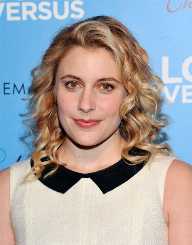 Greta Celeste Gerwig was born 4th August 1983, to Gordon and Christine Gerwig. She was born in Sacramento, California, in the United States. She has two siblings, a brother, and a sister. Gerwig’s father works for a credit union, and her mother is a nurse.

Gerwig studied at St. Francis High School, followed by Barnard College. Although her idea was originally to study musical theatre, she graduated with a degree in English and philosophy.

Gerwig had plans to become a playwright, but when she couldn’t get into any MFA programs for playwriting, she moved to acting instead.

Her first role was in a movie called, LOL (2006), followed by a role in Hannah Takes the Stairs (2007). She became identified as a member of the “mumblecore” film genre. Mumblecore movies were independent films, where the dialogue was often improvised and considered more important than the actual acting.

Commercial success started in 2010 when Gerwig starred in Greenberg, with Ben Stiller. She followed this with a major role in To Rome with Love (2012), one of Woody Allen’s movies.

In 2017, Gerwig directed her first movie, Lady Bird, and it was recognized as one of the top 10 movies of the year.

Gerwig has also done television work, appearing in five different series. She debuted on the Jimmy Kimmel Live! show in 2010. Between 2011 and 2015, she did 21 episodes of China, IL, voicing one of the characters in the animated series.

In 2014, Gerwig debuted in the stage production of The Village Bike at one of the theaters in New York.

Gerwig has been nominated for nearly 50 awards. She has won several of them, including one Golden Globe Award, one Satellite Award, and one Independent Spirit Award.

Gerwig has not been married but has been in a relationship with Noah Baumbach, a writer, and director, since 2011.