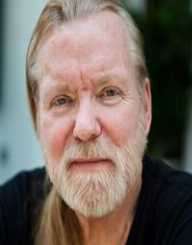 Gregg Allman was an American rock singer. He was a member of the Allman Brothers Band.

Gregg Allman was born on December 8, 1947, in Nashville, Tennessee. His father was killed when Allman was two years old. The family moved to Daytona Beach, Florida. He followed his passion for music with his older brother Duane when he was a teenager. Allman learned how to play the guitar, but his talents were in keyboards and vocals.

Gregg Allman and his brothers attended Castle Heights Military Academy in Lebanon, Tennessee. After the family moved to Florida, Allman graduated from Seabreeze High School in 1965.

As teens, Gregg Allman and his brother were influenced by R&B and blues.  They formed the band Allman Joys in 1965 and played locally. They moved to Los Angeles in 1967 and performed as the Hour Glass.

Finally, the Allman Brothers Band was created in 1969 with Allman, Duane, and four other members. Their genre was like no other with blues infusion and Allman's gravelly voice on vocals. They released their debut album The Allman Brothers Band in 1969 with songs written by Allman. Two years later, the band released Idlewild South which included one of their greatest songs “Midnight Rider.”  Their live album At Fillmore East helped them become even more popular.

The band was rising to stardom when Duane Allman died in a motorcycle accident in 1971. The band chose to continue without a replacement for him and released their next album Eat A Peach the next year with success. Their best-selling 1973 album Brothers and Sisters secured their place as one of the biggest rock bands of the decade.

Even though the Allman Brother Band was gaining in popularity, it also had their struggles. Another band member died in a motorcycle accident, the lead guitarist was trying to take the role of band leader from Allman, and Allman himself was dealing with his own drug addiction.

One incident in 1976 led to him testifying against his road manager Scooter Herring who was under investigation for dealing with illicit substances.  The band fractured apart because of it.

Gregg Allman had already started his solo career with his 1973 album Laid Back. He recorded live albums before with The Allman Brothers Band, and his 1974 album The Gregg Allman Tour was also well received.

He recorded an album with his then-wife Cher in 1977, but that one flopped. Future solo album including I'm No Angel in 1987 and Just Before the Bullets Fly were successful.

Gregg Allman published his memoir My Cross to Bear in 2012 as a way to write about his alcohol and substance abuse. Despite Allman's health issues, he continued to tour and perform either as a solo artist or with his brothers.

He believed that playing music helped him no matter how tough it was. He started canceling tour dates in 2016 due to health as well as a vocal injury.  His last album Southern Blood was released after his death in 2017.

Gregg Allman is considered one of the greatest singers of all time. He will always be considered a pioneer of Southern rock.

However, they survived seven years together before their divorce in 2008. In 2017, Gregg Allman married Shannon Williams, who was with him when he died. Overall Allman had five children.

Allman died on May 27, 2017, in Richmond Hill, Georgia at the age of 69. He died of liver cancer complications.

The Allman Brothers Band was inducted in the Rock and Roll Hall of Fame in 1995. In 2011 he was nominated for the Grammy Award for Best Blues Album for Low Country Blues.

Gregg Allman had some health issues. He dealt with drug and alcohol abuse as early as the inception of The Allman Brothers Band. It affected his performances as well as his personal life.

Another issue was Hepatitis C, which he contracted in 2007 from a dirty tattoo needle. Allman was diagnosed with liver cancer in 2008 and receive a liver transplant in 2010. Another ailment was atrial fibrillation. Complications from cancer ultimately led to his death.