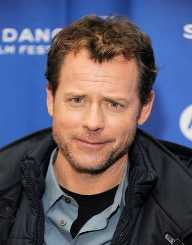 Greg Kinnear is an actor, featuring in film and television and before he was a television journalist.

Gregory Buck "Greg" Kinnear was born on 17th June 1963 to parents Edward and Suzanne. Greg was born in Indiana, Logansport. He was partly raised in Logansport until he was twelve when his father was sent to Beirut in Lebanon.

Greg Kinnear's father Edward was a career diplomat for the U. S. State Department; the family went to Lebanon for a few months. The family was transferred from Beirut to Athens after a civil war broke out in Lebanon in 1973.

The Kinnears stayed in Athens for seven years, allowing Greg Kinnear to have a stable education. Greg studied high school in the American Community Schools in Athens, where he started his talk show, School Daze with Greg Kinnear.

After high school, Greg Kinnear returned to America to go to the University of Arizona in Tucson, becoming a member of Alpha Tau Omega fraternity. He graduated in 1985, with a bachelor’s degree in Broadcast Journalism. He moved to Los Angeles to seek employment.

Greg Kinnear's first job in Los Angeles was at the Charles Band’s Empire pictures, and he worked in the marketing department. Greg had small parts in L. A. Law, before hosting various segments on Movietime, sometimes an on-location reporter for MTV during 1986 and 87.

Greg Kinnear was given an opportunity to create and co-produce Best of the Worst, which he also hosted in 1990 for a year.

Talk Soup on E! (formerly Movietime) catapulted him to certain fame in 1991; he then moved onto NBC to write and produce late-night talk show Later with Greg Kinnear in 1994.

During the same year, he played the role of a talk show host in Blankman, a Damon Wayans comedy. 1995 saw another rise in fame with a role as David Larrabee, in a remake of Billy Walker classic Sabrina; he was offered a lead role in feature film Dear God.

Since then, Greg Kinnear had appeared in a few blockbusters, such as As Good As It Gets, You’ve Got Mail. More recent works include Little Men, Same Kind of Different as Me and Anchorman 2. He appeared in The Kennedys, portraying John F. Kennedy.

The eight-hour miniseries was aired in ReelzChannel after History Channel refused to air it. He has forty-three film credits and seventeen television appearances.

The latest win was at the Boston Film Festival in 2008, where he won Best Actor for movie Flash of Genius.