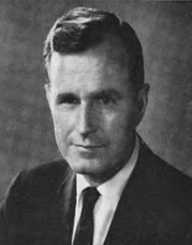 George Herbert Walker Bush was born on June 12, 1924, in Milton, Massachusetts. He began his education at the Greenwich County Day School in Greenwich, after his family moved there in 1936. He later attended the Phillips Academy and held some positions in the student council.
After the attack on Pearl Harbor, Bush decided to join the U.S. Navy. He graduated from Phillips Academy in 1942 and became a naval aviator.

George Bush finished the training and was commissioned as an ensign at the Naval Airs Station Corpus Christi in 1943. In the following year, he was promoted to Lieutenant and commenced in operations against the Japanese in Bonin Islands. During 1944, he flew 58 combat missions and received the Distinguished Flying Cross and three Air Medals. He was then assigned to the Norfolk Navy Base and was honorably discharged in 1945.

After being discharged from the army, Bush married Barbara Pierce. They had six children. He was accepted to Yale University before enlisting in the military and, after being discharged took up the offer. He received a Bachelor of Arts degree in economics in 1948. After graduation, he and his family moved to West Texas where he entered the oil business. In 1951, he started the Zapata Petroleum Corporation.


The beginning of the political career

After becoming a millionaire from his oil business, George Bush became increasingly interested in politics. He became the Chairman of the Republican Party for Harris County, Texas in 1964. Two years later, he was elected to a House of Representatives seat from Texas and was appointed to the House Ways and Means Committee, where he voted to abolish the military draft.

In 1970, President Nixon convinced him to run for the Senate, but he was defeated. After his loss, Bush was appointed by Nixon as the Ambassador to the United Nations, where he served for two years.

In 1973, Nixon asked George Bush to become the chairman of the Republican National Committee. As the chairman, Bush asked Nixon to resign after the Watergate scandal, for the good of the party. He then went on to serve as the US Envoy to China. In 1976, Bush became the Director of the Central Intelligence and served on this post for one year. After that, he became the Director of the Council on Foreign Relations.

In 1980, George Bush decided to campaign for the Presidency of United States against Ronald Reagan. Bush lost to Reagan but was made the Vice-President of United States. When Raegan was re-elected in 1984, Bush continued to hold the same office. After the end of Raegan’s term, Bush decided to run for the presidency and won the 1988 election, defeating the Democratic nominee Michael Dukakis. He became the first serving Vice President to be elected as the 41st President since 1836.

His time as the president was filled with several significant events, like the fall of Berlin Wall and the collapse of the Soviet Union, which marked the end of the Cold War. One of his major works was the 1989 Operation Just Cause when the U.S. invaded Panama to catch the leader Manuel Noriega. This ended his dictatorship in the state and brought Noriega to the United States, where he was tried for drug trafficking.

During Bush’s presidency, several significant legislations were passes. He passed the Americans with Disabilities Act, Radiation Exposure Compensation Act, Clean Air Act, and the Immigration Act. In 1990, Bush ordered the Operation Desert Storm, after Saddam Hussein invaded Kuwait. This operation was backed by United Nations to accomplish the liberation of Kuwait. During this time, Bush’s popularity was extremely high in the U.S.

However, after the failure of United Nations Operation in Somalia to bring humanitarian help to Somalia citizens, where several US marines died, Bush was severely criticized. After the end of his first term, Bush announced that he would contest in the re-election, but was defeated by Democratic candidate Bill Clinton.

After the end of his presidency, George Bush remained active and made several public appearances. He was awarded the Ronal Reagan Freedom Award in 2007. Bush was also featured in television ads together with Clinton to encourage aid for victims of Hurricane Katrina. In 2008, Bush endorsed Senator John McCain for the presidency. In 2011, President Barack Obama awarded Bush with the Presidential Medal of Freedom.

Bush suffers from vascular parkinsonism, which has forced him to use a wheelchair since 2012. In 2015, he suffered a severe neck injury, but despite that, he threw the ceremonial first pitch for Houston Astros at Minute Maid Park. In 2017, Bush sent a formal letter to Donald Trump, informing that due to his poor health, he will not be able to attend his inauguration, but wished him the best.