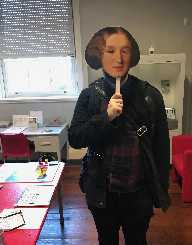 George Eliot was born as Mary Anne Evans on 22 November 1819. She is an acclaimed poet, novelist, journalist, and translator of Victorian era England. She used the pen name George Eliot to hide her female identity. In those days, female writers were believed to be capable of writing only light-hearted romantic novels and were not taken seriously. She used the male pen name George Eliot to avoid this categorization and wanted to break the stereotype.

Born in Nuneaton, Warwickshire, England, Mary Anne Evans was the second child of Robert Evans and Christina Evans. His father Robert Evans was the manager of the Arbury Hall Estate on behalf of the Newdigate family of Warwickshire. Mary Ann or Marian as she was affectionately called was intelligent and was a vociferous reader from a very young age. As she was not physically attractive, her father thought it to be wise to invest in her education rather than think about her marriage.

Mary Anne Evans was permitted to use the library of the Arbury Hall extensively, her father being the manager of the estate. She grabbed the opportunity with both hands as she accessed the study materials of the library entirely and studied them vigorously. The impact of her association with the library was visible in her seven novels. All of her seven books were profoundly influenced by Classical Greek literature and their themes with Greek tragedies.

In 1850, Mary Anne Evans returned to England and moved to London aspiring to be a writer. Soon, she joined the left-wing journal The Westminster Review and became its Assistant Editor in 1851. As the Assistant Editor of the journal, she contributed many articles and reviews besides overseeing the work of producing the journal.

Mary Anne Evans' first complete three-volume long novel ‘Adam Bede’ was published in 1859. The novel was a resounding success, and the readers were inquisitive to know the identity of its author. The reaction of the people was so overwhelmingly applaudable that a few people came forward falsely claiming to be the writer George Eliot. Apprehending the problem, the real George Eliot, Mary Ann Evans came forward and revealed her identity.

‘Adam Bede’ soon went through eighth printing within a year and the publisher Blackwood doubled the royalty for the book and returned the copyright. In the very next year, she came up with another three-volume epic novel, ‘The Mill on the Floss.’ The novel was mostly about her childhood, the saga of alienation from her brother Isaac reaching a new level of fiercely enticing appeal and psychological subtlety.

Mary Anne Evans published another novel, ‘Silas Marner’, the following year. It was one of the best known of her books. She wrote the novel ‘Romola’ between 1862 and 1863. It was a historical novel set in the background of the late fifteenth century. Her next novel ‘Felix Holt, the Radical’ was published in 1866. It had a veraciously political theme.

In 1869, Mary Anne Evans started writing her masterpiece novel ‘Middlemarch.’ She completed the novel in 1871. It was initially published in the ‘Blackwood's Magazine’ in fragments as eight monthly installments. The sophisticated portrayal of the characters and a deep psychological insight was the hallmark of this novel.

Mary Anne Evans was hailed as the ‘Victorian Sage’ after the publication of ‘Middlemarch.’ It was an incredible achievement for a nineteenth-century woman in contemporary Great Britain. Her next novel ‘Daniel Deronda’ was published in 1876. The keen analysis of the characters of this novel was seen as the peak strength of George Eliot’s literary career. It was her seventh and last novel.

George Eliot had a controversial personal life. She was believed to be associated with many embarrassing, even unreciprocated emotional attachments. John Chapman, the editor, and publisher of The Westminster Review was one of them. The name of Herbert Spencer is also referred as her other suitor.

George Henry Lewes, a philosopher, and critic, met George Eliot in 1851 and by 1854 they decided to live together. Lewis was already a married man with children, and her wife Agnes Jervis was also involved in severe polygamy. However, Lewis and Eliot traveled to Germany in July 1854 and saw the trip as their honeymoon. They even considered themselves married, Eliot referring herself as Mary Ann Evans Lewes and mentioning Lewis as her husband.

Within two years of Lewes’ death, on May 16, 1880, Mary Anne Evans married John Cross, a man twenty years younger to her. They went to Venice for the honeymoon. There, in a fit of depression, Cross jumped from the hotel balcony to the Grand Canal in front of it. He survived, and the couple returned to England in due course of time. After moving to a new house in Chelsea, Eliot suffered a throat infection. On December 22, 1880, she breathed her last succumbing to her kidney ailment diagnosed a few years earlier and the persistent throat infection. She was 61 at the time of her death.