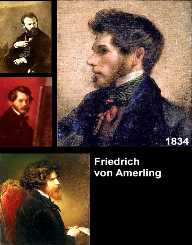 Austrian portrait painter Friedrich von Amerling was born on April 14, 1803, in Vienna, Austria to Franz Amerling and Theresia Kargl. His father used to earn his livelihood working as gold and silversmith. Amerling studied at the Akademie der bildenden Künste (Academy of the Arts), Vienna from 1815 to 1824. He was fortunate to have received guidance from teachers like the conservative history painter Hubert Maurer at the Academy.

Later, Friedrich von Amerling traveled to Prague and attended the Academy of Arts in Prague from 1824 to 1826. In the Academy, he studied under the able guidance of Joseph Bergler the Younger. In between the years 1827 and 1828, Amerling stayed in London. During his stay in London, he met the renowned portrait painter Sir Thomas Lawrence and was greatly influenced by his style of paintings. From London, he went to Paris and studied there with the likes of Horace Vernet. Later, he went to Rome to explore further and hone his skills as a painter.

During his stay in Rome, Friedrich von Amerling was summoned to Vienna on an official project that required him to paint a life-size portrait of Emperor Francis I of Austria (the portrait is kept in the Kunsthistorisches Museum of Vienna). After completing the ordered painting, the reputation of Amerling as a portrait painter grew by leaps and bounds, and soon, he became the most sought-after portrait painter in Austria.

In Vienna, Friedrich von Amerling continued to work for the Austrian Court, the aristocracy and the middle class dealing mostly with the historical and genre paintings and landscapes. He served the Austrian Court in the capacity of portrait painter for about 15 years. In 1829, he was conferred with the Reichel Prize of the Academy in Vienna.

Apart from receiving the Reichel Prize, Friedrich von Amerling was visited by several significant scholars and musicians (such as Franz Liszt) at his home. In 1878, he was honoured and was elevated to nobility entitling him to be called Friedrich Ritter von Amerling. He acquired the Gumpendorf Castle in 1858. In 1879, he was bestowed with the honour of Orden der Eisernen Krone.

Amerling breathed his last on January 14, 1887, in Vienna. He was interred in the Viennese central cemetery and is commemorated with a memorial created by Johannes Benk. A street in Vienna was renamed Amerlingstrasse in 1887 immediately after his death. In 1902, Johannes Benk created and installed the Amerling Monument in the Viennese city park.

In 1848, Austrian Post Office issued a commemorative stamp on the 60th death anniversary of Amerling. He is regarded as one of the outstanding portrait painters of the Nineteenth century.