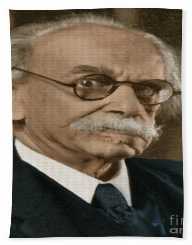 Franz Boas is a German-born accomplished scientist and academic during the early 20th century. He rose to fame due to his contributions to the field of anthropology. Boas is known as the “Father of American Anthropology.”

He married to Marie Krackowizer in 1887, and they had six children as a couple. Boas died on December 21, 1942. His cause of death was from a major stroke at the age of 84 while he was at New York City’s Columbia University Faculty Club.

The Birth of a Naturally Curious Child

Named as Franz Uri Boas, he was born on July 9, 1858, in Minden, Westphalia. He came from a family of well-educated people and a wealthy background. He came from a family of Jews wherein his parents embraced Enlightenment. Both of his parents refused to conform to the fundamental dogma of society. As a result, Boas’ parents were lenient towards him and encouraged the young Boas to pursue whatever interest he may take in.

When Boas was enrolled in Minden’s Gymnasium in his younger years, he developed an interest in the subject of cultural history. He grew an affinity to the subject of natural sciences at the age of 5 and dedicated his time to learning about botany and zoology. His love for science carried on into his adolescence as he attended various universities in pursuit of knowledge. Among the universities he attended are Heidelberg University, Bonn University, and the University of Kiel of which he received his doctorate in physics, with a minor in geography in1881.

Franz Boas went to Berlin to continue his learning, and in 1883 he organized the first anthropologic expedition set in Baffinland, Canada among the Eskimo people. The journey took a year to finish, and upon its end, he returned to Germany and worked with fellow anthropologist Rudolf Virchow and ethnologist Adolf Bastion in Berlin’s Royal Ethnological Museum. At the same time, he started teaching the subject of geography at the University of Berlin.

He went to New York in 1887 where he stayed for the rest of his life. He took a job as an assistant editor in a Science magazine while also serving as an anthropology instructor at the newly established Clark University located in Worcester, Massachusetts. The following year, he published “The Central Eskimo” which was his first monograph regarding the research he did on Baffinland about the people’s way of life.

After teaching at Clark University for two years, Franz Boas was named the head of the Department of Anthropology of the said university but later resigned in 1892. Around the same time, he worked at the famed 1893 World's Columbian Exposition or popularly known as the Chicago World’s Fair. For the fair, he worked on the exhibition that portrayed the way of life of the Native Americans for the public's viewing. He began teaching anthropology at Columbia University in 1896 and as an assistant curator at the American Museum of Natural History that lasted until 1905.

Boas’ Legacy as an Anthropologist

Franz Boas is known in the field of anthropology for his argument against the belief that Western civilization was superior in comparison to simpler societies. He also stated that culture developed via the interactions of groups of people in history which he discussed thoroughly in his 1911 published work entitled The Mind of Primitive Man.

In 1937, he updated the book by adding more information which led to the publication of Race, Language, and Culture in 1940.