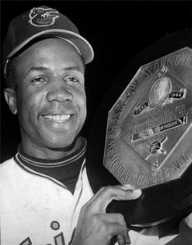 American major baseball league player and manager Frank Robinson was born on the 31 August 1935 in Beaumont, Texas. He spent his formative years in West Oakland, California.

Frank Robinson attended McClymonds High School, and it was during this time that he played baseball on the American Legion team as well as at school.

During 1956 Robinson was National League Rookie of the Year as well as being one of the outfielders who tied for the most home runs achieved by the National League All-Star Team. He was named the Most Valuable Player in Major League Baseball in 1961 and 1966. He also won the Triple Crown awarded to the player with the most home, runs and best batting average. His team won the World Series in 1966 and Frank Robinson was named the World Series Most Valuable Player. He became the first African American Manager in major league baseball in 1975 when the Cleveland Indians appointed him as a player-manager. Robinson subsequently managed the San Francisco Giants (1981-1984), Baltimore Orioles (1988-1981) and the Montreal Expos Washington Nationals (2002-2006).

Frank Robinson won the American League Manager of the Year Award in 1989. In 1982, he was inducted into the National Baseball Hall of Fame and in 2005, he was awarded the Presidential Medal of Freedom.

Frank Robinson’s wife is Barbara Cole whom he married in the early sixties. They had two children together.