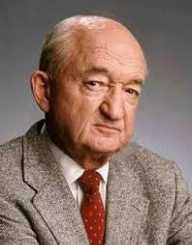 Franklin Parsons Perdue was born in the city of Salisbury, Maryland, on May 9, 1920. His father’s name was Arthur W. Perdue, and his mother’s name was Pearl Perdue. Right after he was born, his parents started a company called Perdue Farms. They sold eggs from the chickens they were raising in their backyard. Frank began to help his parents at a young age. He often fed the chickens and cleaned the coops.

Frank Perdue enrolled at the Salisbury State College, where he studied to become a teacher. He dropped out after two years to focus on the family business.

Franklin Parsons Perdue joined the family business in 1939, at the age of 19. After a disease outbreak, the company switched from selling eggs to selling chicken meat. During World War II, the price of chicken soared, allowing the business to grow. In 1952, his father retired, and Frank became the CEO of Perdue Farms.

He first had an idea to make the meat more appealing by giving it a stark yellow color. He achieved this by adding marigold petals in the chickens’ food. This helped increase sales. In 1968, he opened up a large poultry processing plant in Salisbury.

In the 1970s,  Frank Perdue decided to focus on advertising and marketing. He released the company’s first commercial in 1971. He appeared on the commercial himself, which was quite a new thing at the time.

Before that, it was unusual for the CEO of a company to communicate directly to the public. The commercial became one of the most successful advertising campaigns of the year.

The business expanded, adding new plants in Virginia, North Carolina, and Delaware. Over the next two decades, Perdue appeared in over 200 commercials. Most of them featured his famous phrase, “It takes a tough man to make a tender chicken.”

Perdue’s advertising paid off much. Perdue Farms soon became one of the biggest chicken companies in the United States. Frank retired in 1991, leaving the business to his son Jim.

Frank Perdue passed away after a brief illness on March 31, 2005. He was 84 years old. He was buried at the Jerusalem United Methodist Church Cemetery in Parsonsburg, Maryland.