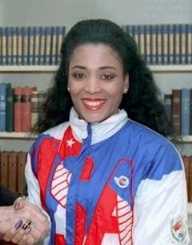 Florence Joyner was an American athlete who holds the world records in the 100 and 200 meters sprint events.

Florence Joyner was born on December 21, 1959, as Florence Dolorez Griffith. She was the seventh child in the family of eleven children born to Robert and Florence Griffith. She grew up in California. Joyner went to Jordan High School. She moved to California State University. She dropped out of college due to financial constraints. She was employed as a teller in a bank. Bob Kersee, her college coach, got her financial assistance. Joyner went back to college. She transferred to the University of California in Los Angeles. In 1983 she graduated with a Bachelor of Arts degree, majoring in Psychology.

Joyner started running at the age of seven years. She competed and won the sprints in the Jesse Owens National Youth Games when she was 14. In high school, she participated in the sprints and established herself as relay anchor. She set state high school records over the long jump and sprint events. In college, she won the NCAA championships in the 200 meters in 1982. She challenged the 400 meters title in 1983 and won.

Joyner continued to train under Coach Bob Kersee. She represented the US in the 1984 Olympics in Los Angeles. She managed the silver medal in the 200 meters finals. She became a star for her speed and elegance on the track. She stood out for her colorful bodysuits and her long manicured nails. In 1987 she married Al Joyner. She dropped Kersee and incorporated Al Joyner as her new coach. She reverted to Kersee in preparation for the 1988 Olympics. In the Seoul Olympics, Joyner won a record three gold medals on the track. She won the 100, 200, and 4 by 100 meters. She won a silver medal in the 4 by 400 meters. She became the second best female athlete in the history of the Olympics behind Fracina Blankers. Blankers won four gold medals in the 1948 London Olympics.

She became a celebrated sports personality in the US. She appeared in television shows, sports events, and sports magazines. Joyner was Athlete of the Year in several journals including The Associated Press, and the Track and Field Magazine. Joyner became the James Sullivan Award’s Best Amateur Athlete of the Year. She retired from the track events in February 1989.

As a celebrated athlete, Joyner got lucrative business contracts. She signed endorsement deals in Asia and the US. She signed a contract with a toy making company for the production of a Joyner look like a doll. She covered several magazines as the feature girl. Joyner got a contract to design the Indiana Pacers basketball team’s playing uniform. She was famous for designing her own flamboyant track outfits.

She was appointed to serve as the co-chair of the President’s Council on Physical Fitness. She tried her hand in acting appearing in the television show Santa Barbara. She appeared on other shows like 227, and the Charlie Rose television programs.

Joyner made a comeback to the track in 1996 after seven years. She was almost 37 years. She began training in the 400 meters in a bid to emulate her earlier performance in the lesser sprints. Joyner suffered an injury on her right leg and missed her Olympic spot. She missed out on her dream to be the first female triple world record holder.

In 1989, a former teammate of Joyner revealed serious allegations concerning her performance. Darrell Robinson claimed the Olympic champion enhanced her performance using banned steroids. Robinson implicated former fallen Olympic champion Carl Lewis in the doping scandal. In a rejoinder, Joyner explained her change of physique and better times on the track to training. She narrated the inclusion of squats and lower body training as the cause for the improvement. Joyner was investigated and tested severally. She was cleared of the allegations after passing all the doping tests.

On September 21, 1998, Joyner died in her home while sleeping in Mission Viejo California. She was 38 years. Two reports emerged following her death confirming one theory. The coroner reported she suffocated in an epileptic seizure. The coroner ruled out homicide or murder. Forensic tests revealed no traces of any fatal dosage of drugs. The family lawyer confirmed her epileptic history. Joyner was mourned by the sports fraternity world over.

In her memory, several educational institutions in the US adorn her name. A recreational park in Mission Viejo was dedicated in her honor.

In 1995, she was inducted to the US Track and Field Hall of Fame. Joyner was a gifted designer and painter. The Art of The Olympians displayed her paintings in their galleries.

She still posthumously holds the 100 and 200 meters world records.