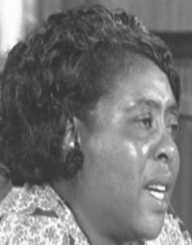 Fannie Lou Townsend was born 6th October 1917, to James and Ella Townsend. She was born in Montgomery County, Mississippi, in the United States. Hamer was the youngest of 20 children.

Hamer started picking cotton from the age of six to help her family. Her parents worked as sharecroppers from 1919, and from 1924 to 1930, Hamer attended the one-room school on the plantation which had been set up for children of the sharecroppers and was utilized between picking seasons.

Fannie Lou Hamer loved to read and excelled in both reciting poetry and spelling bees. She left school when she was 12 to help her parents who were getting older by then. Hamer kept up her reading through Bible study at her church, and in 1944, when the owner of the plantation found out she could read, Hamer was made the time and record keeper.

Fannie Lou Hamer found an interest in the civil rights movement during the 1950s. In 1962, she heard about the right to vote through volunteers of the Student Nonviolent Coordinating Committee. Hamer became an active member of the civil rights movement. She traveled with others to Indianola, Mississippi with the aim of registering to vote. When she couldn’t answer the question they asked her, she was turned down. The registration test was slanted to keep blacks from being able to register for voting.

Hamer got back home to an angry plantation owner who told her Mississippi wasn’t ready for black equality. When she answered back, the owner sacked her and made her leave the plantation, even though her husband had to stay until the end of harvest.

Over the next few days, Fannie Lou Hamer moved from house to house to stay safe. On one occasion she was shot at over a dozen times in a drive-by shooting by white supremacists. Hamer and her family moved the next day to a nearby county because they were afraid the Ku Klux Klan might try and retaliate because she tried to register for voting.

Three months later, she tried again to take the literacy test, but she was again rejected. On her third attempt in January 1963, Hamer successfully passed and was finally registered to vote in the State of Mississippi. Although she was registered, she was unable to vote when she tried, because another ruling had come in that voters had to have two poll tax receipts. This was another law that was used against both black and Native Americans to prevent them from voting.

Fannie Lou Hamer eventually paid for and got her poll tax receipts. After all this, she became more involved with the Student Nonviolent Coordinating Committee (SNCC). She went to conferences, taught classes, and gathered signatures for petitions to try and secure government funds for poor black folks.

In 1963, Hamer took on the role of Field Secretary for the SNCC. She was travelling with a busload of other activists to attend a conference when they stopped at a café along the way for a break. They were refused service, and after one thing leading to another, the group was arrested and taken to the county jail.

The party was all beaten badly, and it took Hamer a month to recuperate when she was eventually freed. She never fully recovered physically from the ordeal. Undeterred, she returned to Mississippi and continued to organize drives to encourage voter registration.

Fannie Lou Hamer co-founded the Mississippi Freedom Democratic Party (MFDP) in 1964. It was to give minority groups a voice at the table. Hamer and her group travelled to the 1964 Democratic National Convention to stand as the official delegation from the state of Mississippi. Hamer wasn’t successful in running for the U.S. Senate, but she continued to do her civil rights work anyway, determined to make a change. Her speech was televised on nearly all the major news networks that night, which provided massive exposure for Hamer and the MFDP.

In 1967, Hamer published her autobiography, Praise Our Bridges. In 1968, the MFDP was given a seat. This was due to the Democratic Party adding a clause that required equal representation from the states’ delegations. Hamer worked diligently across all levels of society to introduce equality, especially in the agricultural industry where sharecropping was just another name for keeping ex-slaves working for the white man.

She established the Freedom Farm Cooperative (FFC) in 1969 to help African-Americans in the farming industry, and she was also instrumental in a support program called The Pig Project which helped provide meat to people who previously couldn’t afford it. Hamer established the “pig bank” to help blacks be able to get their land. A family would care for a pregnant pig, and once it had its babies, the piglets were used for food and to make money. The “pig bank” grew astronomically over the next few years.

Fannie Lou Hamer was soon able to purchase 40 acres of land for $8,000 from a black farmer. Hamer called the property “The Freedom Farm.” Her goals were to establish agriculture to help with nutritional food for the most needful people, to provide a housing development, and to establish a business incubator for entrepreneurs to help them on their way, and re-train those that needed it.

As the Freedom Farm continued to grow, additional services like financial counselling and a scholarship fund were added.

Hamer was also responsible for securing 35 houses subsidized by the Federal government for poor black families that were having trouble making ends meet. She became a national delegate for the party in 1972. In 1975, the Freedom Farm stopped because of a lack of funding. In 2011, posthumously, a book called The Speeches of Fannie Lou Hamer: To Tell it Like it is was released.

Among her many awards and honors, Fannie Lou Hamer received the following:

1970:   Received an honorary degree from Columbia College in Chicago

1993:   Inducted into the National Women’s Hall of Fame

In 1945, Fannie Lou Hamer married Perry “Pap” Hamer. He was a tractor driver on the same farm Hamer was working on, and after they married, they remained on the farm for another 18 years. The couple adopted two girls, although one died from complications when she was refused admission at the hospital due to Hamer’s work with the civil rights movement.

Hamer’s later years were not spent in good health. In 1961 she had a tumor removed, and unbeknownst to her at the time, the white doctor that treated her also gave her a hysterectomy, which was common for the period.

Fannie Lou Hamer spent a long time in the hospital due to nervous exhaustion and was released in January 1972. In 1974 she was back in the hospital with a nervous breakdown, and in 1976 she had surgery for breast cancer.

On 14th March 1977, Hamer died from complications of breast cancer and hypertension.