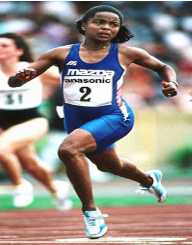 American field and track athlete Evelyn Ashford was born into a military family on the 15 April 1957 in Shreveport, Louisiana. She is the eldest of five children.

Evelyn Ashford graduated from Roseville High School, California (1975), then enrolled at the University of California in Los Angeles on a sports scholarship (1978).

Ashford showed talent as a field and track athlete at a young age. She was at an athletics meet in California when coach Pat Connolly noticed her. Connolly subsequently became her coach and continued to coach her until 1985. At age 19, Ashford was selected for the US Olympic team to participate in the 1976 Summer Olympics Games held in Montreal, Canada and finished fifth in her event.

In 1979, Evelyn Ashford became the first female American Athlete to run the 100m in under 11 seconds. She also ran the 200m in under 22 seconds. Her main opponents around this time were East German track stars, Marita Koch and Marlies Gohr. In 1983, Ashford set her first world record when she beat Gohr’s record of 10.81, coming in at 10.79 seconds.