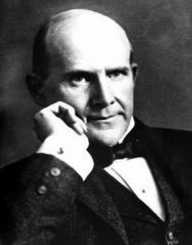 Eugene V. Debs was a renowned Socialist Union leader who supported the Industrial Workers globally. He achieved this by starting one of his industrial union in the United States. Eugene played an imperative role in the formation of the American Railway Union. Debs was one of the devoted socialist that stood for his nation to the latter.

On November 5, 1855, Eugene Debs was born in Terre Haute, Indiana in the United States to Jean-Daniel and Mari Bettrich. He enrolled at Terre Haute Public school, but he was forced to drop out at 14 years old. He soon began to work as a painter in different railroads before embarking on a fireman position. The struggles and hardships taught him how to have a die-hard life. He had compassion for human beings no matter the religion or race. He felt for the poor workers who worked more for fewer pennies. There and then he created a Brotherhood of Locomotive Firemen where he chaired the secretary and treasurer department. For the rest of his years, Debs received positive remarks for his subtle work. For this reason, he became the president of the American Railway Union.

In 1871 Eugene landed a fireman position where he worked for the next three years. He also managed to attend his enrolled class around the area. In 1874 he resigned from his past job where he went ahead to work at a grocery shop. In the mid of 1875, Eugene joined a Brotherhood of Locomotive Firemen Union. He was a regular attendee where he was chosen to represent the Terre Haute lodge. For this reason, Debs became a great figure both in the community and several movements.

Early in 1894, Eugene joined Pullman Strike where he was dissatisfied with several workers who manufactured train cars. The Pullman Palace Car Company made the autos. According to him, it wasn’t right for the organization to cut half percent of their wages. The employees joined up with him where they participated in a strike. As a result, hundreds of strikers were killed, and millions of properties were destroyed. Overall, Eugene was arrested for his involvement where he was sent to prison.

While serving his jail term, Debs came to love socialist ideologies. Before his release, he read countable books and letters from the socialism field. He was later released in 1895 where he played a prominent role in the Social Democracy of America. Afterward, he founded the Industrial Workers of the World union. From 1907 to 1912 Debs chaired the Associate Editor of the Appeal to Reason it.It was a weekly magazine that achieved high accolades due to his high pitch of writing.

In the mid of June in 1918, Eugene protested against the World War I where he came out with a negative speech. As a result, he was arrested and later convicted in court. Unfortunately, he founded himself behind bars for ten years. While in prison Debs was selected to vie for the presidency under Socialist party union. He received over a million votes, but Warren G. Harding took the seat. He was later released from prison under Harding’s rules.

Eugene Debs married Kate Metzel in 1885.Debs received a heroic welcome after serving his term in jail. But his health wasn’t as regular as he struggled to regain his ideal healthy status. He continued to write thousands of articles while still making important speeches. He was later admitted to Illinois hospital in 1926 where he died due to heart failure.