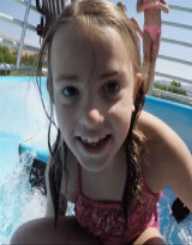 Emmi ‘Babytard’ Butler is the the youngest member of the Shaytard family channel on Youtube. She is also known as Loofus on the vlogs.

Emmi Laurie Butler was born on 19th August 2007, in Pocatello, Idaho United States. Her parents are video loggers on YouTube (YouTuber) and had shown Emmi off since birth. Father Shay Carl and mother Colette started their new channel the Shaytards since Oct 2008. Hence, Emmi Laurie is known as Babytard, even though she was the third child in the family of five. She has older brother Gavin (Sontard), and an older sister Avia (Princesstard). Her younger brothers are Brock “Rocktard” Butler and Daxton  “Brotard.”

Emmi Laurie was the youngest child when the Shaytard started, hence her nickname Babytard. The channel has almost five million subscribers in 2017, and her parents monitor Emmi's other social media accounts. The Shaytard family records their daily lives five days a week and has documentaries of themselves. While the children themselves do some of the recordings, it is the parents who review and upload it. As Emmi Laurie passion is singing, Emmi’s recording of Let It Go garnered twelve million views in 2014, when she was seven years old. Since then, she has sang This Is My Year, originally from Rawn Erickson.

In 2010, Emmi featured on the cover of James Blunt’s album Some Trouble. The family had also appeared in America's Funniest Videos. The family moved from Idaho to Los Angeles a year after Emmi was born, but had since moved back to Idaho in 2014. Another YouTuber NicePeter wrote the family's intro theme song in 2010. And in 2014, the family uses Life Through a Lens by Jackson Harris. Emmi has been steadily grown from a shy girl to a funny and confident one in front of viewers.

Aside from singing, Emmi’s other passions are cheerleading and dancing. More recently, Babytard has grown to like makeup, and Disneyland characters. Emmi Laurie is also famous for her funny one-liners and opinions.