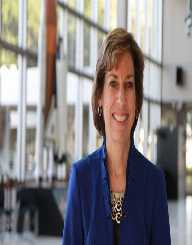 Born on May 10, 1958, Ellen Ochoa is an American veteran astronaut and engineer. She is currently the Director of the Johnson Space Center in Houston, Texas since 2013 as the first Hispanic as second female director. She took over as the director after Michael Coats retired on December 21, 2012. Ochoa became the first Hispanic woman astronaut in 1991 and the first of that race in the world to go to space during a nine-day space trip aboard shuttle Discovery.

Ellen Ochoa was born on May 10, 1958, in Los Angeles, California. She lived with her mother and four siblings after her parents had divorced. She was educated at the Grossmont High School in El Cajon and graduated in 1975. She later enrolled at the San Diego State University, where she graduated with a Bachelor of Science degree in physics with Phi Beta Kappa in 1980. Ochoa then enrolled at the Stanford University in 1981 where received a Master of Science degree and subsequently her doctorate in electrical engineering in 1985. She started her career at NASA by first working as a research engineer at the Sandia National Laboratories and NASA Ames Research Center

After her education, Ellen Ochoa joined NASA as a research engineer at the Sandia National Laboratories and later the Ames Research Centre in Silicon Valley California in 1988. There, she explored the use of the optical system in information processing. While at NASA she also led the group of research investigating optical systems for automated space exploration. She was a co-inventor on three patents including an optical object recognition method, an optical inspection system, and a method for noise removal in images.

Ellen Ochoa also patented an optical system to detect defects in a repeating pattern and has authored many technical papers used at conferences and in scientific journals. She later rose to the Chief of the Intelligent Systems Technology Branch at Ames where she oversaw the research and development of computational systems for aerospace missions involving 35 scientists.

In 1990 Ellen Ochoa had the opportunity to be part of NASA as an astronaut candidate and a year later became an astronaut making her the first Hispanic woman astronaut. There she provided technical support for computer hardware and robotics, serving the Chief of the Astronaut Office as Assistant for Space Station, lead spacecraft communicator (CAPCOM) in Mission Control, a crew representative for flight software and as a Deputy Chief of the Astronaut Office.

In 1993, Ellen Ochoa made history by becoming the first Hispanic woman to go to space when she aboard the shuttle, Discovery on its nine-day space mission. The mission was to study the Earth’s Ozone layer. She has since then aboard three other space flights logging almost 1000 hours in space. Her space missions and duties were as follows: on STS-56 as a mission specialist in 1993, on STS-66 as payload commander, a mission specialist and flight engineer on STS-96  and STS-110 IN 2002.

During the Space Shuttle Columbia disaster which was televised live, she was in Mission Control. Ellen Ochoa was appointed Deputy Director of Johnson Space Centre in 2007 where she helped manage the Astronaut Office and the operations of aircraft. She held the position until she retired in December 2013. She was then appointed a Director of NASA’s Johnson Space Center in January 2013 making her the first Hispanic to hold that office.

Ellen Ochoa has gained several honours and recognitions including the NASA highest award, the Distinguish Service Medal, 1997, Presidential Distinguish Rank Award for Senior Executive in Federal Government and Space Flight Medals. Several schools and institutions have been named after her.

Ellen Ochoa is married to an intellectual property attorney Coe Fulmer Miles. The couple has two sons. She is a classical flutist with the Stanford Symphony Orchestra and has received a Student Soloist Award.