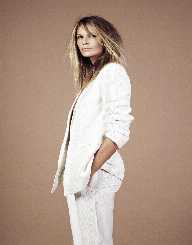 Elle Macpherson was born on March 29, 1964, in Killara, New South Wales, Australia. Her birth name is Eleanor Nancy Gow. Her father was the entrepreneur and sound engineer and a former president of Sydney rugby league team. Her mother was a nurse. Macpherson’s parents divorced when she was 10, and she moved together with her two siblings.

When her mother remarried, and due to a clerical mistake in her new school, her surname was changed to her stepfather’s surname Macpherson. Her stepfather Neil was a multimillionaire who owned a chain of stereo equipment stores. She studied at Killara High School and later attended the University of Sydney, where she studied law for one year.

During a ski vacation in Aspen, Elle Macpherson was discovered. She was 18 years old, and quickly signed a contract with Click Model Management. Her career rose immediately, and she featured the covers of major magazines like Elle, Harper’s Bazaar, Marie Claire, Vogue, GQ, and others. She made frequent appearances on the cover of Elle magazine - she appeared in every issue for six straight years. In 1985 she became the face of French skincare company Biotherm.

In 1994, Elle Macpherson made her film debut in the film Sirens. She played an artist’s model, alongside with Hugh Grant, Sam Neill, and others. After this she also starred in Batman & Robin, The Edge with Anthony Hopkins and The Mirror Has Two Faces.

Macpherson appeared in five episodes of the hit series Friends in 1999. Her most controversial roles was in Showtime miniseries A Girl Thing, where she played a woman experimenting with bisexuality.

Elle Macpherson left her modeling agency in 1994 to start her own business - Elle Macpherson Inc. She began to produce highly popular calendar series as well as workout videos. In 1990, Macpherson launched her lingerie collection which was an international success. She partnered with Brendon Limited Apparel when the company offered her to model their lingerie line.

At the time, her idea of personal lingerie line was very unorthodox, but it soon became the best-seller in Great Britain and Australia. In 2014 she became the co-founder of WelleCo with its signature product The Super Elixir. Together with models Claudia Schiffer and Naomi Campbell, Macpherson launched a restaurant Fashion Café. Unfortunately, the business wasn’t successful and became bankrupt in 2000.

In early 1980’s Elle Macpherson was dating Billy Joel and became an inspiration for his songs “The night” and “And So it goes.” When she was 21, Macpherson married the creative director of Elle - Gilles Bensimon, who she met in a photo shoot in 1984. The marriage lasted three years.

In 1996 Macpherson started seeing French financier Arpad Busson, and the couple had two sons together. The family lived together in London, until their separation in 2005. From 2009 she started dating Jeffry Soffer and became engaged in March 2013.

Besides English, Macpherson is also fluent in French and speaks Spanish and Italian. After performing nude in the 1994 film Sirens, she learned that the media began to look for nude photos of her. To address this issue, she appeared in 1994 May issue of Playboy magazine in a 12-page spread. She earned a stunning $25,000 for a page.

Elle Macpherson is the European Ambassador for RED - initiative to raise money and awareness for AIDS, Tuberculosis, and Malaria. She is also an ambassador for UNICEF.

Elle Macpherson is also the ambassador for the Smile Foundation in Australia - foundation that helps families of children with rare diseases and organizes government research grants. She has also modeled for fundraising causes, like for 2007 British flood victims. She is also the patron of National Association for the Children of Alcoholics.