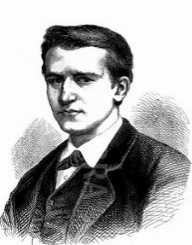 Elias Howe. was an American inventor. Born on July 9, 1819, he was regarded as the inventor of lockstitch sewing machine. Growing up, he worked with a textile company and later served as a mechanics apprentice during which he developed the idea of the sewing machine.

Elias Howe was born on July 9, 1819, in Spencer, Massachusetts. He was the son of Dr. Elias Howe Sr. and Polly (Bemis) Howe. He grew up in Massachusetts. In 1835, he started an apprenticeship in a textile company located in Lowell. However, during the Panic of 1837, and subsequent mill closing, he left for Cambridge, Massachusetts. While there, Elias Howe joined his cousin Nathanial P. Banks as a mechanic apprentice with carding machinery. The following year, he apprenticed under Ari Davis, who was a master mechanic in Cambridge. Davis was a specialized manufacturer and repairer of precision instruments especially chronometers. It was during his days with Davisthat Howe came up with the idea to create the sewing machine.


Career And Invention Of Sewing Machine

Elias Howe did not invent the sewing machine in entirety as it is meant to believe. Some people had already developed the idea as early as 1790, and in fact, some had patented their designs and manufactured functional sewing machines. What Elias Howe did was to come up with a more refined design concept compared to that of his predecessors.

Elias Howe was hence, awarded the first United States patent (US Patent 4,750) on September 10, 1846, for a sewing machine using a lockstitch design. Howe’s sewing machine had three important features, which are still in most modern machines. They are; a needle with the eye at the point, a shuttle operating beneath the cloth to form the lock stitch, and an automatic feed.

The Search For Investors

Elias Howe successfully acquired a patent, but his next hurdle was to get investors for mass production of his work. However, this became very difficult, as Elias Howe could not find investors in the United States. The only option was to get other interested people outside the country. As such his elder brother Amasa Benis Howe in October 1846, traveled to England in search for financiers. Amasa sold his first machine to Willian Thomas of Cheapside, London for £250. William owned a corsets, valises, and umbrellas manufacturing factory. In 1848, Elias Howe and his family joined his brother in London but later returned to the US due to this wife’s failing health and a business dispute with Thomas.

From 1849 to 1854, Elias Howe engaged in a legal battle with Isaac Singer in defense of his patent. Singer incorporation with Walter Hunt had modernized a duplicate of Howe’s the sewing machine with the same lockstitch he had invented and patented. Many other entrepreneurs were manufacturing and selling sewing machines. How was able to win the case and earned royalties from Singer and the other entrepreneurs. Through royalties paid him and his own manufacturing of the sewing machine, Howe became a wealthy man.

In 1851, Elias Howe patented an "Automatic, Continuous Clothing Closure."In 1865, Howe founded The Howe Machine Co. in Connecticut. Until1886, his sons-in-law, the Stockwell Brothers, operated the company. His sewing machine won a won a gold medal at the Paris Exhibition of 1867 and also received the Légiond'honneur from Napoleon III for his invention. He was inducted into the United States National Hall of Fame in 2004.

Elias Howe and Elizabeth Jennings Ames married on March 3, 1841, in Cambridge. They had three children Jane Robinson Howe, Simon Ames Howe, and Julia Maria Howe. Elizabeth died in 1849. His second wife was Rose Halladay. Elias Howe died on October 3, 1867, of gout and a massive blood clot. He was aged 48. Howe was interred in Green-Wood Cemetery in Brooklyn, New York. Rose Halladay also died on October 10, 1890, and was buried beside his Howe.