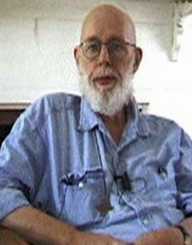 Edward St. John Gorey was born 22nd February 1925, to Edward Gorey and Helen Dunham. He was born in Chicago, Illinois, in the United States. His parents divorced when he was 11, and they remarried when he was 27.

Gorey studied at Francis W. Parker School, and then from 1944 to 1946, served in the U.S. Army. In 1946 he began his studies at Harvard University and graduated in 1950. He was a co-founder of the Poets’ Theatre in Cambridge, which was supported by members of the Harvard faculty. Gorey also studied art for one semester in 1943, at the School of the Art Institute of Chicago.

In 1953, Edward Gorey moved to Manhattan. He gained employment with Doubleday Anchor in the Art Department as an illustrator for book covers. He illustrated some famous works over the years, including The War of the Worlds by H. G. Wells, and Old Possum’s Book of Practical Cats by T. S. Eliot.

Gorey also did the interior artwork for many children’s books by John Bellairs. He worked with Doubleday Anchor until 1960. He also published his work, the first of which was The Unstrung Harp, in 1953. In addition to his name, Gorey published under dozens of different pen names.

The Gotham Book Mart is credited with launching Gorey’s career. They had exhibitions of his work in their gallery, and he became very well-known through the process. Over the years, Gorey’s illustrations have gathered a cult following. His works are known for their Victorian and Edwardian settings, and several of his books are purely illustrations with no words included.

In 1977, Edward Gorey created the costumes for the Broadway production of Dracula.

After he died, many unpublished works were found, both complete and incomplete, and it was announced there would be plenty of material to publish many books and plays into the future. Gorey wrote more than 100 publications in his lifetime, including, The Sinking Spell (1964), The Sopping Thursday (1970), and The Fraught Settee (1990).

While his publications can be difficult to obtain, Edward Gorey did release four omnibus collections which include most of his materials. These are, Amphigorey (1972), Amphigorey Too (1975), Amphigorey Also (1983), and Amphigorey Again (2006). In addition to his works, Gorey illustrated over 50 works for other famous authors, including Edward Lear, Charles Dickens, T. S. Eliot, and Samuel Beckett.

Edward Gorey won a Tony Award for his costume designs in 1977, and he also won a Deutscher Jugendliteraturpreis Award for his writing, which is Germany’s only state-funded literary award.

Edward Gorey left most of his estate to an animal charity. His house has become the Edward Gorey House Museum.