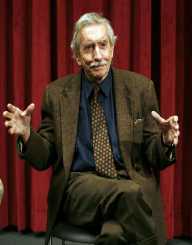 Edward Franklin Albee was born on March 12, 1928, to his mother, Louisa Harvey.  His birth name was Edward Harvey, but no one knew who his father was.  A few weeks later his birth mother put him up for adoption.

Reed and Frances Albee adopted him.  His adoptive parents were conservative. They owned and showed saddle horses as one of their businesses.  Reed Albee came from money and Frances was a socialite. This was the atmosphere he grew up in.

Edward Albee attended many different schools.  He attended Clinton High School then Lawrenceville School in New Jersey where he got expelled. He was sent to Valley Forge Military Academy in Wayne, Pa and also got dismissed or rather asked to leave. He finally finished high school at Choate School in Wallingford, Connecticut.

Edward graduated in 1946.  Following his graduation, he attended Trinity College, but he left in 1947 due to missing too many classes as well as not attending church.  And in the midst of all of this, at the age of 18, he left home and moved to New York.

Edward moved to live in an artist community in Greenwich Village. Since he was on his own, he worked various jobs to help ends meet. He also lived off of his inheritance from his grandmother.

During this time he experimented with is writing.  Edward Albee attempted to write poetry, but it failed.  He then turned to short stories. But what gave him his fame was his plays. Considered an existentialist writer, he was a gay author. However, his writing showed lives of everyday people. Edward wrote a few one-act plays.  Most of which were acted off Broadway. The play that placed him on Broadway was Who’s Afraid of Virginia Woolf? Which he wrote in 1962.  It was over three hours long. As with several of his plays, it was turned into a movie. It also won an award.

While in the prime of his career he wrote several plays.  In 1959, he wrote the one act play, Zoo Story.  He followed that up with several more one-act plays.  He wrote A Delicate Balance in 1966, Seascape in 1972, and Three Tall Women, in 1994.  There were other one acts plays as well.

His adapted plays were Lolita in 1981, The Ballad of the Sad Café in 1963 and several others. Quite a few of his works received accolades and awards. A list of some is below.

Edward Albee has several other awards such as the Kennedy Center Honor and National Medal of Arts which he received in 1996.  He also was awarded the Fitzgerald Award for Achievement in American Literature Award in 2003.  And in 2011 he received the Edward McDonald Medal for Lifetime Achievement.

In his later years, he was a professor at the University of Houston. One thing he is known for is in 1967 he established the Edward F. Albee Foundation. It gives writers and artist a place to do their craft while enjoying a retreat.

He grew up in a conservative family after he was adopted. He also knew that he was gay. So he left home around his 18th year of life to live his life the way he wanted to live it.

His first relationship was with Terrance McNally for more than six years. It was during the 1960’s that he had this relationship. Following that he became involved with the man who was the love of his life, Jonathan Thomas.  His relationship with him, a sculptor, lasted from 1971 until his death in 2005 of cancer.

Although he fought alcoholism for two years early on in his career it didn’t seem to effect his career later in life. There was a biography written about him, entitled Edward Albee:

A Singular Journey by Mel Gussow.  Of note, he was briefly engaged to Delphine Weissinger, a debutant for a brief time. But it did not deter him from his alternative lifestyle.

Edward Albee won many awards for his work in general. Awards such as being inducted into the American Theatre Hall of Fame in 1985; being elected a fellow American Academy of Arts and Sciences member in 1982 and in 2009 being given an honorary degree from Bulgarian National Academy of Theatre and Film Arts (NAFTA).  His plays and adoptions were written from 1959 until 1976.  His contribution to the literary world will be seen for many years to come.