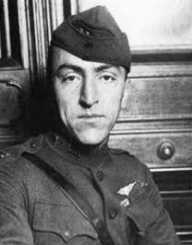 Edward Rickenbacker, or most commonly known as, Eddie Rickenbacker was born on October 8, 1890, to William and Elizabeth (Baster) Rickenbacker. He was the third child for them, out of eight. He had one sibling who passed before reaching adulthood. He was a mischief-maker, as most boys are when they are young.

His father owned his own construction company. However, they still lived in relative poverty. They lived in a two-room house that had a loft in it. Later on, his parents added a second loft and a kitchen to the house. He grew up without indoor plumbing, running water, or electricity.

His mother engrained religion on him, while his father installed discipline and was a practical-minded man. His father passed away, when Eddie was 13 years old, in 1904.

Eddie Rickenbacker ended up with a formal sixth-grade education. In 1905, he started Correspondence School for mechanical engineering.

After his father passed away in 1904, against his mother and brother's wishes, Eddie Rickenbacker dropped out of school to start working. He lied about his age so that he could seek employment as a night time worker at the Federal Glass Factory. He quit there when he found a day job, working at Buckeye Steel Casting Company.

He had always had an interest in vehicles, and his first chance of working on them came at Evans Garage. Then in 1907, he went to work for the Columbus Buggy, working as a salesman. In 1910, as a stunt to promote Firestone Columbus, he entered his first race and fell in love. He raced in the Indianapolis 500, for Columbus Buggy in 1911, and continued to race for them until he went professional.

Eddie Rickenbacker became a professional racer in 1912. His race team was called the "Flying Squadron," until he left them at the end of 1912 when he went to work for the Mason Company. Eddie raced for the Mason Company until 1914. In 1914, he competed in an event in Dayton Florida, where he set an impressive speed record for the time, of 134 mph. He did this in a Blitzen Benz. That same year, he went to race for Prest-O-Lite until the end of 1916.

In 1921, Eddie Rickenbacker partnered with Byron Everitt, Harry Cunningham, and Walter Flanders to create the Rickenbacker Motor Company. Their company tried to use the too advanced and technological sound mechanism in their vehicles (such as a four-wheel braking system). There advances, scared the competition, so their competitors manipulated the consumers to stop them from buying their cars. By 1927, Rickenbacker Motor Company had gone bankrupt.

Then in 1927, Eddie Rickenbacker raised enough money to pay back his loans for the Rickenbacker Motor Company and also to buy the Indianapolis Motor Speedway. He used the speedway as a testing ground to create improvements to cars. He closed the speedway, after the Indy 500 of 1941. He kept it closed during the duration of World War 2. In 1947, he sold Indianapolis Motor Speedway to Anton Hulman Jr.

Eddie Rickenbacker enlisted in the United States Army in 1917. He arrived in France on June 26, 1917. His rank was Sergeant First Class and was originally staff driver for General John Pershing. All he wanted to do was to fly. However, he was two years older than the program allowed and did not have the college education that was required to become a combat pilot. He did, however, have high ranking connections that gave him special permission to go to aviation school.

While at the aviation school, he became a commissioned First Lieutenant and a chief engineer of the Army Air Corps. He was then transferred to Issodun, where he created many improvements to the airbase and aircraft.

In February of 1918, Eddie Rickenbacker was sent to Villeneuve-les-Vertus, where he became a member of the 94th Aero Pursuit Squadron. He started out doing missions, where he was attacking ground offensives. Then on April 24, 1918, he had his first combat victory, when he took down a German Pfalz. By May, he had become an Ace (a person who has shot down several enemy aircraft).

By September of 1918, he became squad leader of the 94th Aero Pursuit Squadron. On October 30, he had his 26th confirmed victory. By the end of the War in November of 1918, he had shot down 13 Fokker D. V11s, 4 German fighters, five balloons, and four reconnaissance planes. He held the record of most confirmed victories until WW2. When he was discharged in 1919, he held the rank of Captain. After the War, he went on a Liberty bond tour.

In January of 1928, Eddie Rickenbacker became an assistant general manager for General Motors. He convinced GM to buy Fokker Aircraft Cooperation of American. He then quit in 1932, for one year, and worked at American Airlines. When Eddie came back to General Motors, he was hired as Vice President of Public Relations Aeronautic Division. He is then appointed as general manager of Eastern Air Lines, on January 1, 1935, and by 1938 Eddie had made Eastern Air Lines a profitable endeavor for General Motors.

In April of 1938, GM decided that they no longer wanted Eastern Air Lines, and decided to sell it. Eddie Rickenbacker then bought Eastern Air Lines, from General Motors. He was president from the time he bought it until 1953 when he resigned from this position to become the chief executive officer. He oversaw many radical changes for the airline industry and collaborated with many pioneers of aviation.

He promoted air travel to the public, and never liked to use the word "safe." He knew how dangerous air travel could be. On February 26, 1941, the Douglas DC-3, Eddie was riding in, crashed outside of Atlanta, Georgia. Even though he suffered severe, life-threatening injuries, he tried to console other passengers. The next day, when the crash was found, Eddie was nearly dead. He spent many months in the hospital, and it took many more months at home for him to heal.

On October 1, 1959, he was forced out as the chief executive officer but remained chairman of the board until he retired on December 31, 1963.

Eddie Rickenbacker publicly supported the United States in World War 2. He asked civilians to support the War. He even offered the use of Eastern Air Lines to the military.

He toured bases in the Southwest United States in March and April of 1942. Publicly he was there to boost the morale of soldiers and to create support of the cause; privately he was there to examine the bases for Secretary of War Henry Stimson. In September, Stimson sent Eddie to England to see if there was any espionage going on. When he returned in October, he was sent to the Pacific theater to do more base tours and to give a private message to General Douglas MacArthur.

On his trip, the plane that Eddie Rickenbacker and the crew used had a faulty navigational system, and they were also given the wrong weather report, which caused the team to run out of fuel and have to ditch the plane. The eight men tied three rafts together; their food supply ran out within three days. They drank rainwater that they collected, tried to catch fish, and ate a seagull to survive.

The Army and Navy wanted to give up looking for them after two weeks. However, Eddie's wife Adelaide pressured them to give it one more week. On November 13, 1942, the men were found, 500 miles away from where they were supposed to be, suffering from exposure, dehydration, and starvation. Only one man, Sergeant Kaczmarczyk died.

On December 19, 1942, he completed his mission and reported to Secretary of War Stimson and General Arnold. Then in April of 1943, he did another tour of bases and production facilities, in North Africa, the Middle East, the Soviet Union, and a few other places.

While in the military Eddie Rickenbacker received: 7 Distinguished Service Crosses, the Legion of Honor, the Medal of Honor and the French's Croix de Guerre. As a civilian, he received the Medal of Merit.

In 1921 Eddie Rickenbacker reconciled with his friend Adelaide Frost Durant, he learned that she was divorced from her first husband, and had a quick courtship with her. They were married on September 16, 1922, in a small gathering. In 1925, they adopted their first son, David Edward. Then in 1928, they adopted their second son William Frost. Adelaide was a strong-willed, independent woman, who supported her husband until his death. They had a strong, loving bond, Eddie had this same strong, loving bond with his sons, even though he pushed them to high standards.

Eddie was known as a conservative. He was firmly against President Roosevelt's New Deal. He believed it was going to lead the US to become a socialist country. He was so opposed to it that NBC would not allow him to criticise it on the air. He was also against any form of government interference and the unions. In the 1960s, Eddie began to public speaking about his beliefs.

When he retired from Eastern Air Lines, Eddie Rickenbacker and Adelaide moved to Bear Creek Ranch, the name of their ranch, in Texas. After living there until 1957, they decided to donate it to the Boy Scouts of America and move to New York City. After living there for a few years, they settled in Coral Gables. In 1972, Eddie survived a stroke, then in July of 1973, while in Switzerland, to seek medical treatment for Adelaide, he caught pneumonia and passed away on July 23, 1973.