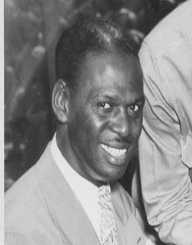 Earl “Fatha” Hines was a jazz musician. His influence led to the beginnings of modern jazz and bebop.

Earl Hines was born on December 28, 1903, in Duquesne, Pennsylvania. His father was a cornet player, but Hines took to the piano because he experienced discomfort when he tried to blow into the horn. Music was important in his house. Along with his father, his stepmother was an organist, and his uncle played brass instruments.

Hines attended Schenley High School. He had private piano lessons and studied classical music since the age of 9.

Earl Hines formed his jazz trio in Pittsburgh when he was 14.  When he was 16, he toured with Lois Deppe where he developed his style of piano.

In 1925, Hines moved to Chicago, Illinois. As the jazz capital of the world during that period, Hines was able to work with a number of singers. He also played piano with instrumental groups. He was able to work with Louis Armstrong during this time. They recorded songs such as “West End Blues” and “Weather Bird.” Hines was a composer of many of the songs he recorded including “Rosetta” and “You Can Depend on Me.”

In 1928, Earl Hines formed his band. He was the bandleader at the Grand Terrace for 11 years. From 1928 to the 1940s, Hines also toured with great jazz musicians of the time such as Dizzy Gillespie and Charlie Parker. He recorded hits such as “Piano Man” and “Jelly, Jelly” which he also wrote. He and Louis Armstrong joined together again from 1948 to 1951 for the Armstrong's All Stars.

When Hines moved to San Francisco in 1955, he performed at the Club Hangover. His musical career spiked again when he recorded more songs in the 1960s and toured again.  He visited the Soviet Union in 1966 and performed at the White House twice between 1969 and 1976.

Earl Hines continued to tour throughout the early 1980s including Europe and Japan.

Earl Hines is known as one of the greatest jazz pianists, often referred to as the Father of Modern Jazz Piano. His unique playing style resembled the trumpet.

Hines married Janie Moses in 1947. The couple had two children, including Janear Hines, who later became an actress. Hines and Janie divorced in 1979.

Earl Hines was inducted in the Big Band and Jazz Hall of Fame in 1980.