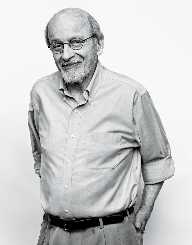 E.L. Doctorow was born 6th January 1931, to David and Rose Doctorow. He was born in The Bronx, New York, in the United States. E.L. Doctorow father managed a music shop. Doctorow attended The Bronx High School of Science, which is considered one of the most prestigious schools in the U.S. His first literary article was published by school literary magazine, Dynamo.

He then enrolled at Kenyon College in Ohio where he majored in philosophy. During this period, he also participated in college theater productions. In 1952,  Doctorow graduated with honors. After college, he went to Columbia University where he undertook a year of graduate work in English drama.

Doctorow was then drafted into the United States Army.

After he finished his military service, he returned to New York. He took up a position as a reader for a film company, and it was there that he wrote his first novel. Inspired by all the Westerns he was reading at work, his first novel was in the Western genre. It was published in 1960, to very good reviews. It was called Welcome to Hard Times.

Doctorow continued to write but also had regular work so he could look after his family. He worked as a book editor for NAL, staying there for nine years. In 1964, he moved to Dial Press to become the editor-in-chief. Doctorow decided he wanted to pursue a writing career, so he left the publishing industry in 1969. He was invited to take the position of Visiting Writer at the University of California, Irvine campus, and he accepted.

His next book was finished in 1971, followed by another novel, Ragtime, in 1975. Ragtime was recognized as an exceptional novel.

As he continued to write through the years,  E.L. Doctorow also taught at several schools. These included Sarah Lawrence College, Yale School of Drama, Princeton University, and the Universities of Utah and California. He was also the Loretta and Lewis Glucksman Professor of English and American Letters at the University of New York.

E.L. Doctorow won 18 awards, some of which include:

In 1954,  E.L. Doctorow married Helen Esther Setzer. Setzer was a fellow student at Columbia University. The couple had three children together, Richard, Jenny, and Caroline.