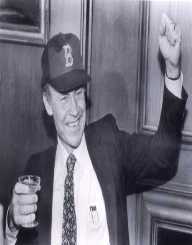 Dudley Robert Herschbach was born to Dorothy and Robert Herschbach on the 18th day of June 1932 in the California city of San Jose. The Herschbach family has an Irish ancestry while Dudley’s mother had a mixed heritage that features French, German and Dutch lineages.

Growing up for Dudley was an experience that riveted on life at the orchards as their neighborhood was one that was rural. His father worked early on as building contractor but became a breeder of rabbits in the latter years.

From an early age, he developed an interest in reading but at the same time, involved himself in outdoor activities like scouting, and sports.

Dudley Robert Herschbach came across the National Geography article penned by Donald Menzel when he was nine years old. This article was on astronomy and getting used to the publications of the Harvard Observatory spurred his interest in the sciences. He took to star gazing and mapping over the next few years to document his observations.

His high school years were at Campbell High School, with his favorites zeroed down on Science and Mathematics. The subject of chemistry became more comfortable for him after a while when his teacher, John Meischke took steps to enhance his appreciation of the subject.

Coming from a lineage that never saw the four walls of universities, Dudley never thought he would become a graduate, but his teachers took him on the trajectory of possibility. They made it possible for him to use scholarships that entailed football and academics. Although he played football while in high school, he eventually turned away from it.

Dudley Robert Herschbach was admitted to Stanford University in 1950, and this became his turning point. He was able to ensconce himself in experiments and library research.

In 1954, Dudley Robert Herschbach graduated with a Mathematics degree and bagged another in Chemistry at the masters’ level in 1955. His work and thesis at this stage zeroed-in on exploring gas-phase reactions.

Dudley explored Physics further and bagged another degree in 1956. Going on a further stride here, he was able to earn his Ph.D. in 1958 by studying Chemical Physics. His doctoral strides were under the watchful eyes of another distinguished tutor, Edgar Bright Wilson, Jr. The subject of his thesis at this level was “Internal Rotation and Microwave Spectroscopy.”

Dudley Robert Herschbach worked on as a junior fellow at Harvard in the two years to 1959. He became a protagonist of molecular beam studies at this stage while exploring elementary chemical reactions.

As much as tutors were of note in the life of Dudley Robert Herschbach, mention also needed to be made of his fellow students like Larry Krisher, Victor Laurie as well as Jerry Swalen. They were also in tandem with him as he explored the frontiers of chemical reactions.

The wealth of his research and studies were enriched by access to Los Alamos National Laboratory and the reputed National Research Council in Ottawa. While Dudley explored spectra at the latter, he worked on Mathieu functions at the former.

When Dudley Robert Herschbach became an Assistant Professor at Berkeley in 1959 in the field of chemistry, he turned an Associate Professor by 1961. He explored the field of alkali atoms while here by delving into the earlier explorations made in the field by Michael Polanyi. Coming after four decades of inertia in this field, Dudley demonstrated an avid eye for breaking into uncharted waters.

His findings were such that demonstrated that apparatus that weren’t complicated could be put to use to realize single-collision conditions. The outcome was that when product molecules emerge from this stride, they had a translational energy and recoil angle of the predetermined range.

As other scientists looked at the work of Dudley, they were encouraged to explore controlled experiments in this field further. Prominent among researchers who interacted with his explorations were John Polanyi, Sheldon Datz, Richard Bernstein, Peter Toennies and Ned Greene.

Dudley Robert Herschbach left Berkeley for Harvard in 1963 when he was given the Professorial Chair in Chemistry. This invigorated him to explore further and develop prototypes in the reaction dynamics of alkalis. By 1967, Yuan Lee identified with his explorations and became a member of his core research group.

The exploits of Dudley and his group led to the emergence of a super machine. This was possible through the augmenting of differential pumping as well as elevated mass spectroscopy. There was a deployment of ion counting techniques here as a spin-off from nuclear physics. They also made use of supersonic beam sources that have been earlier advocated by the likes of Jim Anderson and John Fenn. This duo had earned a name at the time as enterprising chemical engineers that could not be ignored.

A remarkable spin-off of the works of Dudley Robert Herschbach was the recognition that there is the formation of Methane spontaneously within earthly confines. This required a mix of high temperature and high pressure to be elicited. This gave a leeway to associate the process with biogenic hydrocarbon formation.

Dudley was also noted in popular media as his voice was used in an episode of ‘The Simpsons.’ Here, he presented the Physics Nobel Prize to Professor Frink. The animated TV series episode was the “Treehouse of Horror XIV.”

Dudley Robert Herschbach bagged the 1986 Nobel Prize for his work in molecular beams that featured his crossed experiments. This was noted for the opening to have chemical reactions analyzed.

He also bagged the 1981 Michael Polanyi Medal, and before then, he had American Chemical Society’s Pure Chemistry Prize in 1965. Even in his kitty was 1978, Linus Pauling Medal. His count of awards surged in 1983 with the American Physical Society‘s Irving Langmuir Prize. In 1991, he was awarded the National Medal of Science.

Dudley also bagged a series of other awards during the rest of the decade to 1999. Dudley is a Fellow of the Royal Chemical Society of Great Britain and National Academy of Sciences. This is in addition to the American Academy of Arts and Sciences, as well as the American Philosophical Society. He is also a distinguished Eagle Scout.

Dudley Robert Herschbach got married to Georgene Botyos, who was a Harvard student of Organic Chemistry in 1964. They served the Currier House as co-chairpersons for an extended period. They made their home in the Massachusetts city of Lincoln. They had two girls, Lisa and Brenda.