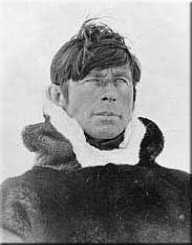 Knud Johan Victor Rasmussen was renowned as a polar explorer and anthropologist. He was born in Jakobshavn on Disko Bay, Greenland on June 7, 1879. His father Christian Rasmussen was a Danish Christian Missionary. His mother Lovise Rasmussen hailed from a Danish-Inuit mixed origin. Inuits are the native people of Greenland, and Knud Rasmussen spent a lifetime researching about them. Among his two siblings, Peter Lim was his brother, and another one was a sister whose name is not known.

Knud Rasmussen spent his early days growing up in Greenland. From his early childhood days, he played with local Inuit tribe children and picked up their language ‘Kalaallisut’ with ease. He also learnt to hunt, drive dog sleds and got accustomed to the inhospitable climatic conditions of the Arctic region. Later, his family relocated, and he subsequently received his formal primary education in a public school in Lynge, North Zealand, Denmark.

From 1898 to 1900, Knud Rasmussen tried to contemplate a conventional life and tested his skills in acting and opera singing. But the career paths he had chosen were not encouraging enough to be continued. He then focussed his attention on his passion and strength and embarked upon his first expedition to Greenland. Known as the Danish Literary Expedition, Rasmussen along with fellow explorers Harald Moltke, Ludvig Mylius-Erichsen and Jørgen Brønlund, toured the remotest icy corners of Greenland to study and observe the local culture of the Eskimo Tribes, particularly the Inuits.

The expedition started in 1902 and concluded in 1904. Upon completion of the expedition, Knud Rasmussen came back to his home in Denmark and began a lecture trip. He talked extensively about the discoveries they made during the expedition in these lectures. In 1908, he wrote a book named 'The People of the Polar North' chronicling his journey through the Arctic and an academic account of the Inuit folklore.

Knud Rasmussen and his friend Peter Freuchen established a Trading Station in 1910 in Cape York, Greenland to serve as the home base for their future Arctic Expeditions. Being situated at the most northerly part of the world (‘Ultima Thule’), the station was named Thule Trading Station. Rasmussen eventually embarked upon a series of seven such expeditions between 1912 and 1933, famously known as the Thule Expedition.

The First Thule Expedition was conducted by Knud Rasmussen and Freuchen to verify Robert Peary’s claim that a water channel divided Peary Land from Greenland. They traveled thousands of kilometers across the Arctic and conclusively proved that no such channel exists. According to the President of the Royal Geographic Society, Clements Markham, the expedition was ‘finest ever performed by dogs’ (Explorers took the thousand kilometer journey on dog sledges).

The Second Thule Expedition started in 1916 and concluded in 1918. It involved a larger team of seven men. The expedition was aimed at exploring the little-known areas of the North Coast of Greenland. Rasmussen suffered the only casualties of his career during this journey. Two of his teammates, namely Thorild Wulff and Hendrik Olsen died during the expedition. In 1919, the Third Thule Expedition was taken out mainly to give logistic support to fellow polar explorer Roald Amundsen. Rasmussen helped in accumulating food and vital supplies as well as in constructing a depot in Maud to facilitate Amundsen’s polar drift on the course of this third Thule Expedition. He wrote about the journey in his book ‘Greenland by the Polar Sea’ in 1921.

In 1919, The Fourth Thule Expedition was taken out. The expedition was mainly an exercise of collecting ethnographic data near Angmagssalik in eastern Greenland. It was completed in 1920.

The Fifth Thule Expedition was a gigantic one. It aimed to find out the original problems of the origin of the Eskimo tribes and remove them thoroughly. Heaps of archeological, ethnographic and biological data were collected from the expedition spanning five years (1921-1924) and later documented in a ten-volume account titled ‘The Fifth Thule Expedition 1921-1924’. A team of seven explorers started their journey from Eastern Arctic Canada. Rasmussen left the group behind and went with two Inuit hunters on dog sledges. They traveled for 16 months across North America and eventually reached Nome, Alaska.

Knud Rasmussen tried to enter Russia from there, but his visa was not granted. He became the first European to cross the Northwest Passage on a dog sledge. In 1927, his journey was chronicled in the book ‘Across Arctic America.’ The book is regarded as classic polar expedition literature. His adventure was also portrayed in the Canadian film ‘The Journals of Knud Rasmussen.’ The film was released in 2006. The journey was remarkable and historical in the sense that it was the longest dog sledge journey ever undertaken by a person of the civilized world and is aptly called as the ‘Great Sledge Journey.’

For the next seven years, Knud Rasmussen plied between Denmark and Greenland, frequently giving lectures as well as doing his writing works. In 1931, he went to his Sixth Thule Expedition. There was a dispute between Denmark and Norway over a portion of eastern Greenland. Rasmussen’s expedition was aimed at consolidating Denmark’s claim over the disputed territory.

The Seventh Thule Expedition was a continuation of the sixth, but he contracted pneumonia after an unfortunate event of food poisoning. He came back to Copenhagen after the incident and breathed his last after a few weeks. At that time, he was 54 years old.

Various pieces of land and mountain ranges are named after him. Knud Rasmussen had received an honorary fellowship from the American Geographical Society and an honorary doctorate at the University of Copenhagen. He is also the recipient of the prestigious ‘Vega Medal’ and the ‘Daly Medal.’

Knud Rasmussen married Dagmar Andersen in 1908. They did not have any children. The 10-volume account of his Fifth Thule Expedition was published posthumously in 1946. The rare artifacts collected during this expedition are also on display in the museums of Denmark.