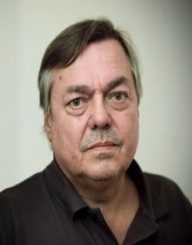 Drago Jancar was born 13th April 1948, in Maribor, Yugoslav Socialist Republic of Slovenia. His father became a member of the Slovene Partisans in World War II, which was an anti-Nazi resistance movement.

Drago Jancar studied law, and while at university became the chief editor of Katedra, which was the student journal on campus. It wasn’t long before he was singled out by the ruling communist regime, for publishing articles that were critical of them.

After leaving university, Drago Jancar found work as an assistant for Vecer, the daily newspaper in Maribor.

Drago Jancar was arrested in 1974 by the Yugoslav authorities for “spreading hostile propaganda.” He had purchased a booklet in Austria called, We Lie Killed in the Rog Forest, which gave the account of a survivor from the Kocevski Rog massacres. He lent it to some friends but was then imprisoned. Although his sentence was 12 months, he only served three, but immediately upon release, he was called up for military service.

After his military service, Jancar returned to Vecer but was confined to administrative tasks, so he left. Jancar moved to Ljubjana. He soon met some intellectuals and artists who thought along the same lines as he did, in being critical of the communist regime. He gained employment as a screenwriter for Viba Film in 1978, but he left in 1980, due to his film adaptation being censored. In 1981, Jancar joined the Slovenska Matica publishing house as a secretary. As of the early 1990’s, he has been an editor at the establishment.

In 1982, Drago Jancar was a co-founder of Nova revija, a new journal that grew to become the major alternative in socialist Slovenia. It was during this period that Jancar met Boris Pahor, a Slovene writer, who survived the Nazi concentration camps. Drago Jancar made a point on several occasions, the profound impact that Pahor had on his life. In his early years, Drago Jancar had not been able to publish his writing work, but after the deaths of Kardelj and Tito, in the late 1970’s, liberalization is gradually starting taking a hold. Jancar got employment as a screenwriter and playwright, and in the 80’s, he started having success with his novels and short stories. His plays became very well-known throughout Yugoslavia, and this led to success further afield, in other parts of Europe. Drago Jancar has continued to write essays and columns on current political situations, for instance, the war in Bosnia.

In 1987, Drago Jancar was appointed President of the Slovene PEN Center. The role allowed him to support the beginning of democracy in Slovenia, and he was one of the authors who signed the manifesto calling for a democratic, plurastic, sovereign state of Slovenia. He held the position until 1991. Drago Jancar was also one of those responsible for organizing a political rally by the opposition, the first since 1945. He actively supported the opposition candidate and helped gain international support during the Slovenian War of Independence.

Drago Jancar has never been involved in politics himself but has been a vocal support of the Slovenian Democratic Party in both the 2000 and 2004 general elections. His novels, essays, and short stories have been translated into 21 languages and published in many countries. He has written more than ten novels, nine plays, and four significant essays.