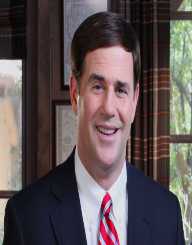 Also Known For : Governor Of Arizona

Douglas Anthony Ducey was born on April 9, 1964, in Toledo, Ohio. His father Douglas Roscoe, Sr. was a former police officer at the Toledo Police Department. When he was still a child, his parents divorced. Douglas’s mother remarried in 1975 to businessman Michael Ducey, who adopted little Douglas. His last name was legally changed in 1976.

When Ducey finished university, he joined Procter & Gamble and began his career working in sales and marketing. He was also trained in management, which prepared him for the role as CEO of Cold Stone Creamery. The company started out as a small local ice cream shop to business in more than 1,400 locations in all American states and ten other countries.

Throughout his business career, Ducey has made several achievements. He is the trustee for Arizona State University Foundation. Ducey also served as the President for Arizona chapter of Young Entrepreneur’s Organization and the Greater Phoenix Economic Club. He is serving on the board of Banner Health Foundation. In 2002 he was awarded the Spirit of Enterprise Award on behalf of the Cold Stone Creamery. In 2004, he was introduced into the W.P. Carey School of Business Hall of Fame. In 2007, he was honored with the AFP Spirit of Philanthropy Award.

In 2011, Ducey became the state treasurer of Arizona. He was the chief banker and investment officer of the state and oversaw more than 12 million dollar state assets. He also served as the State’s surveyor general and was a member of the State Land Selection Board. In 2013, he officially announced his run for the state governors position.

After announcing his run for the governorship, Ducey was endorsed by several conservative leaders, like Senator Ted Cruz and Mike Lee. He won the nomination in the Republican primaries and was subsequently endorsed by several Republican leaders in Arizona House delegation. In the general election, Ducey defeated the Democrat Fred DuVal.

Ducey began his tenure as the Governor of Arizona on January 5, 2015. One of his first works in the office was the institution of a state employee hiring freeze, to attempt balancing the state budget. Ducey inherited a $ 1 billion budget deficit, but over the past years, he has managed to balance it. Ducey made history when he signed a bill which requires high school students to pass the U.S. citizenship test to graduate, making Arizona the first state to implement this.

In his first year as the governor, Ducey vetoed the HB2150 amendment to the animal cruelty law, which would have excluded livestock animals from the protection of this law. In 2017, he also signed bills, that require doctors to care for a baby if its born alive during an abortion and extended the eligibility for schooling for every Arizona student. He has managed to shrink the government by firing around 400 state employees.

Ducey met his future wife Angela while he was a student at Arizona State University. The couple married shortly after they have three sons, Jack, Joe, and Sam. The family resides in Paradise Valley, Arizona.