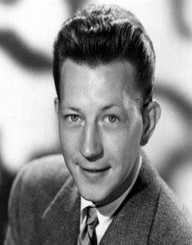 Donald O’Connor was born on August 28th, in 1925. He was well known in the 1950s for being an American dancer, singer, and actor. The role of Don Lockwood’s friend and colleague Cosmo Brown in Singin' in the Rain made him even more famous.

Donald O’Connor was born on August 28th, in 1925 in Chicago at St Elizabeth hospital. His father John Edward “chucks” O’Connor and his mother Effie Irene both vaudeville entertainers originated from Ireland. Donald lived in Danville, Illinois.

Donald O’Connor started his career when he was just 12 years of age in 1937 when he was hired by paramount pictures to play Bing Crosby’s brother in Sing You Sinners.  Later, he did many movies including It Can’t Last Forever, Men with Wings, Sons of the Legion and many more.

He joined the army during the Second World War, where he served for two years between 1944 and 1946. His breakthrough came in the year 1949 after he had returned to acting and starred in Something in the Wind alongside Deanna Durbin. He later did many more movies and TV’s show after.

He hosted Academy Award in 1978 which boosted him career-wise. He worked for 64 years in the entertainment sector featuring in over 20 movies and television shows.

Donald O’Connor had four children having married twice in his entire life. His elder wife Gwendolyn Carter had one daughter Donna. They divorced in the year 1954. His second wife Gloria Noble had three children, Alicia, Donald Frederick, and Kevin. He stayed with his second wife until his death.

Donald suffered from alcoholism in the year 1970 but overcame the addiction after being hospitalized later that year.

Donald O’Connor died on September 27th, 2003 at the age of 78 years in Woodland Hills California. His death was caused by heart failure even though he had struggled with pneumonia for quite some time. His body was cremated and later buried in Los Angeles.