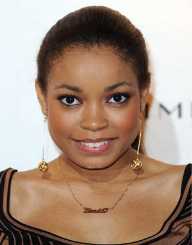 Dionne Bromfield is a British Singer, songwriter and television personality, and presenter. She first came to publicity after performing on ‘Strictly Come Dancing,’ a British TV show with Amy Winehouse. Her debut album, ‘Introducing Dionne Bromfield’ was released by Amy Winehouse's Lioness Records label in 2009. Dionne is also known for being one of the presenters on Friday Download.

Dionne Bromfield was born on February 1, 1996, in East London, England. Her mother, Julie Dein is English and father, Jamaican. She grew up in Chislehurst and went to Gatehouse School in Victoria Park, London. Bromfield later joined Beaver wood School for Girls in Chislehurst up to 2009. She sang a cover of Alicia Keys' song 'If I Ain't Got You' on YouTube with her godmother, Amy Winehouse.
Dionne was later admitted to Sylvia Young Theatre in Westminster. She became the first artist to get signed to Lioness Records in September 2009. She performed with Winehouse at a summer ball on 25 September, and in October, she played ‘The Shirelles' 1960's hit 'Mama Said' cover.

On October 12, 2009, Dionne Bromfield released her debut album, ‘Introducing Dionne Bromfield.’ Her first single cover 'Mama Said' was then released on November 3, 2009. She performed Young Voices which took place in Manchester M. E. N Arena in December 2010. It was later announced that Dionne had recorded a new song, 'Yeah Right' on January 28, 2011. E.g., White co-wrote this song and released online on March 4. The song appeared at number 36 on the UK Singles Chart.
On April 6, 2011, Dionne Bromfield posted an episode of a show with Will Manning, 'Down with Dionne' on YouTube. The episode majorly focused on her love for fashion. In the episode, she performs her single, 'Yeah Right.' The second episode is a challenge in which she tries to pickpocket the people of London. Dionne later got the chance to present on Friday Download on CCBC, a show which would address music, dance, comedy, TV, and lifestyle.
On July 20, 2011, she was joined by her godmother while performing with ‘The Wanted’ at London's Round Table. This act would be Winehouse's last performance before she died on July 23, 2011. On July 1, 2012, Dionne sang with Tinchy Stryder,'Spinning for 2012' at the 2012 Summer Olympics.

Dionne Bromfield received her first award nomination on October 5, 2011, when she was nominated for Best R&B/ Soul Act at the MOBO Awards. She also performed at the Awards ceremony at her godmother's tribute. Her song, 'Move a Little Faster' got featured as an opening song episode of Hawaii Five-0.

Dionne Bromfield is a vibrant young person and socializes a lot with her fans. She is currently dating Nathan Sykes, the star of ‘The Wanted.’

In 2012, Dionne Bromfield recorded a song called 'Black Butterfly' in honor of Amy Winehouse.
In November 2015, she announced that she loved and supported Fifth Harmony, a U. S singing group following their U. K gigs in Manchester and London.