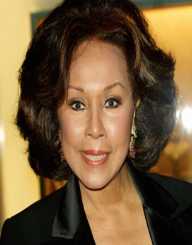 Actress Diahann Carroll was born in Harlem, New York City on the 17 July 1935 to John and Mabel Johnson. The couple had another daughter, Lydia and they divorced in 1968.

Initially, Carroll worked as a model and singer, and then in 1954, she made her stage debut on Broadway in House of Flowers. She also made her film debut in 1954 when she appeared in Carmen Jones.

In 1969 Carroll was nominated for an Emmy Award for her television series Julia. She won the Golden Globe for Julia in 1968 and 1974 was nominated for an Academy Award for Best Actress for her role in Claudine (1974). She has won numerous other nominations and awards including a Tony Award (1962) for best actress in a musical for her work in No Strings, The Women in Film Crystal Award (1992) and the Lucy Award (1998). In 1996 Carroll was given a star on the Hollywood Walk of Fame and in 2003, a Groundbreaking Role Award for Julia. She was also inducted into the TV Academy Hall of Fame in 2011.

Diahann Carroll was married to Monte Kay from 1956 until the early 1960s. They had one child together, Suzanne who was born in 1960. She then had a nine-year relationship with Sidney Poitier and in the early 1970s was engaged to media personality David Frost. In 1973 she married Freddie Glusman, but the married was short-lived due to domestic violence. Her third marriage was to Robert DeLeon in 1975 which lasted until his death in a motor accident in 1977. In 1987 the singer Vic Damone became Carroll’s fourth husband. They subsequently divorced in 1996.

Her memoir, Diahann Carroll, was published in 1886.