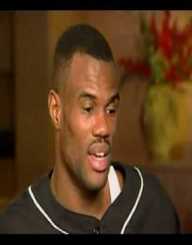 Born on August 6, 1965, David Robinson is a former American professional basketball player. Nicknamed The Admiral, he was a centre for the San Antonio Spurs in the National Basketball Association (NBA). He played for the team in his entire career and was a ten-time NBA All-Star and NBA MVP in 1995. He was a twice NBA Champion 1999 and 2003, twice Olympic Gold Medallist, 1992 and 1996 and twice Naismith Memorial Basketball Hall Fame inductee and twice U.S Olympic Hall of Fame inductee. With his fabulous playing skills, energy and durability, Robinson is considered as one of the greatest centres to have played in the basketball and NBA history.

David Robinson was born to Ambrose and Freda Robinson in Key West, Florida. He is the second child of his parent. His father was a Navy officer as it is a custom in public service, the family moved several times, but later settled in Woodbridge, Virginia when he retired. Robinson grew as a sports person and was very intelligent in school. He schooled at the Osbourn Park High School in Manassas, Virginia. Though he was many other sports, he had a challenge in playing basketball despite his height.

David Robinson was 6 feet, 6 inches tall during his final years in high school, but had not at the time played basketball, but was later added to the school team by his coach. During this time he played so well that he earned all-area and district honours, but his interest in the game was still less. After high school, he enrolled at the United States Naval Academy, where he studied. He acquired a Master of Arts in Administration from the University of the Incarnate Word.

Though David Robinson was not enthused with basketball at the start, he took to active play during his college education. He gradually became the best basketball player the Naval Academy has ever had. At college, he chose the jersey number 50 for his play in the Navy Midshipmen men’s basketball team. In his college years, he played under two coaches first under Paul Evan during his first three years in the Midshipmen. He then played under Coach Pete Herrmann.

Robin was a consensus All-America player with his exceptional play and won the Naismith and Wooden Awards. He graduated in 1987 and was drafted by the San Antonio Spurs with the first overall pick in the 1987 NBA draft. Though the selection was successful, Robinson needed to complete his two years Navy service before he could play for the Spurs.

After David Robinson's two-year service in the Navy, he returned to the NBA and played for San Antonio Spurs, even though there was not an official contract between the two during the 1987 draft. He was offered the average salary of the two highest paid players in the NBA. He became part of the Spurs for the 1989-90 seasons, even though the Spurs was at the time wallowing at the bottom with a 21-61 record. That was the history at the time. With the inclusion of Robinson in the team now, Spurs poor performance in the season began to change.

David Robinson beat the imagination of everybody by leading Spurs to record an NBA historical turnaround. The team had a 35 game improvement to record 56-26. After that season, he was named the NBA rookie of the year and for Spurs, they made it to playoff seven times in a row. With this impressive performance, he was called to the 1992 US Olympic Dream Team to win a gold medal in Barcelona. With his increasing performance, Robinson became the leading scorer in the in the 1993-94 season and in1995 won the MVP trophy.

In the 1997 season, he had a foot injury making him miss out the rest of the regular season. All that Robinson was looking for at this point of his career was for his team to become champions. He had won several personal awards but none with his team. But the addition of Tim Duncan into the Spurs team made the dreams materialise.

The 1998-99 season was delayed for 202 days because NBA owners and commissioners David Stem locked out NBA Players Association to negotiate a collective bargaining agreement. An agreement was reached but the league games had to be reduced to 50. That season spur finished with a record 37-13 which meant they now had home-court advantage for all the playoffs. Spurs won all their first three games against Minnesota Timberwolves, Los Angeles Laker and Portland Blazers to reach the final and later beat the New York Knicks to become the NBA Champions. They became the first former American Basketball Association team to win an NBA title.

Robinson established the Carver Academy in San Antonio in 2001 with $9 million, aimed to enhance the children in the inner-city. The school has since 2012 been absorbed into the public charter schools with a name changed to IDEA Carver. Despite this, Robinson still supports the school and is involved in the daily activities of the school. Robinson has been involved in several philanthropic activities in 1991 he provided $2000 scholarship to students of the Gates Elementary School, San Antonio who were able to make it into college and also provided each $8,000.