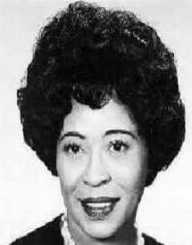 American civil rights activist and journalist Daisy Bates was born Daisy Lee Gatson on the 11 November 1914. Her mother was murdered when she was young. Shortly after her mother’s murder, her father had to flee, leaving Bates in the care of his best friend, Orlee Smith.

Daisy Bates married insurance salesman and journalist Lucius Christopher Bates in 1941, and the couple moved to Little Rock, Arkansas. Her husband launched a newspaper in 1941, and 1942 Bates began working for the paper as a reporter. The publication, the Arkansas State Press, was a weekly pro-civil rights newspaper which reported on the plight of black residents in the state including issues such as police brutality, social problems, and segregated education.

In 1953 Daisy Bates as elected as president of the Arkansas branch of the National Association for the Advancement of Colored People (NAACP). Her husband was the regional director of the organization. The U.S. Supreme Court’s 1954 ruling which declared racial segregation unconstitutional resulted in the Little Rock’s school board attempt to slow integration of the public school system. Bates and her husband were both involved in protesting against this policy and demanded immediate integration. With their activism and involvement, Bates and her husband, L.C. Bates, helped end racial segregation in Arkansas.

Bates rose to prominence when she started talking African American children to the white public schools, with the media reporting the refusal of the schools to admit the children. In 1957 the Arkansas School Board issued a statement saying that desegregation would commence at Central High School, Little Rock. Bates accompanied nine pupils when they went to enroll at the school, despite white opposition and threats of violence. Around this time she had bricks with threatening messages thrown through her window. After some attempts to enroll the nine pupils, on the 25 September 1957, the president sent in the Arkansas National Guard and paratroopers to commence the integration of the school. Bates was then able to escort the pupil's safety to education.

In 1959, the Arkansas State Press was closed down. Bates then relocated to Washington D.C. where she worked for the Democratic National Committee. She was also involved in social programmes, particularly initiatives to combat poverty.
During 1965 Daisy Bates had a stroke and returned home to Arkansas where she continued her community work. Her husband died in 1980 and 1984 she re-started the Arkansas State Press and kept it running for a few years before selling it.

Daisy Bates received many awards for her activism and community work including the Arkansas General Assembly Commendation, the National Coalition of 100 Black Women’s Candace Award (1984), the National Council of Negro Women Women of the Year award (1957). There is a school in Arkansas named in her honor: The Daisy Bates Elementary School. The third Monday in February is an official state holiday known as George Washington’s Birthday and Daisy Gatson Bates Day. And in 1999 President Clinton posthumously award Bates the Congressional Gold Medal.

In 1941 Daisy Bates married L.C. Bates a trained journalist and insurance salesman. They moved to Little Rock where he started publishing his pro-civil rights newspaper. The couple had no children.