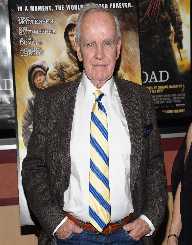 Cormac McCarthy was born Charles McCarthy is a Pulitzer award-winning American writer. Born on July 20, 1933, his novel works encompasses Southern Gothic, Western and post-apocalyptic genres. He has ten novels to his credit with the fifth one, Blood Meridian being listed among the100 best English-language books published since 1923, by Times magazine in 2005. In 1992, he published the novel All the Pretty Horses, which won the National Book Critics Circle and the National Book Awards and later adapted into motion pictures. A film adaptation of his novel No Country for Old Men was released in 2007. The film won four Academy Awards. His other works including Child of God, The Road were also adapted as motion pictures.

Cormac McCarthy was born on July 20, 1933, in Providence, Rhode Island to Charles Joseph McCarthy and Gladys Christina (née McGrail) McCarthy. He has five other siblings. At the age of four, the family moved to Knoxville. While there, his father served as the attorney for the Tennessee Valley Authority. He received education at the St. Mary’s Parochial School and later moved to Knoxville Catholic High School. After graduation, he enrolled at the University of Tennessee in 1951 but dropped out the following year.

He again entered in 1957 and again left without graduating. During his days at the University, two of his stories published in The Phoenix won Ingram Merrill Award for creative writing. He changed his first name from Charles to Cormac to prevent being associated with Edgar Bergen’s character Charlie McCarty.

In 1965, McCarthy through Random House published his maiden novel, The Orchard Keeper. At Random House, Albert Erskine edited the manuscript of The Orchard Keeper, and he would continue to edit Cormac McCarthy’s works for the next two decades. That same year, he gained a Travelling Fellowship from The American Academy of Arts and Letters and therefore decided to travel to Ireland aboard the liner Sylvania. It was on this ship that he met his first wife, Anne DeLisle. Anne was working as a singer on the ship.

The following year, he earned a Rockefeller Foundation Grant to travel through Southern Europe, settling in Ibiza. While there, he wrote the novel, Outer Dark, published in 1968 after he returned to the United States. His next novel was Child of Gods in 1973. In 1979, he published his long awaiting novel, Suttree; he had been working on the novel for about 20 years.

McCarthy received a grant from MacArthur Fellowship and with that money; he financed his next novel, Blood Meridian, or the Evening Redness in the West in 1985. His next work was All the Pretty Horses in 1992. The novel was very successful and gained him recognition in the literary circles. The book won the National Book Critics Circle Award and National Book Award. Two years later, he published The Crossing and followed it with Cities of the Plain in 1998. In 2005, McCarthy published the book, No Country for Old Men and in the following year, came out with The Road in 2006. The Road became very successful and internationally acclaimed winning the Pulitzer Prize for Fiction. That same year, he published the play, The Sunset Limited

McCarthy has won several awards throughout his writing career. He has won four IMPAC Awards, (1996, 2000, 2007, and 2008) and received the Maltese Falcon Award in 2008. In 2008 he also received PEN/Saul Bellow Award for Achievement in American Fiction.

McCarthy married his college sweetheart Lee Holleman in 1961. The couple had a son Collen in 1962. The couple later divorced over some disagreements. In 1967, he married his second wife Annie DeLisle and divorced in 1981. He then married Jennifer Winkley in 1997, with whom he had a son, John. They divorced in 2006.