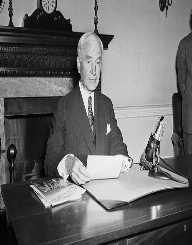 Cordell Hull was an American politician who is best known for serving as United States Secretary of State for the Franklin Delano Roosevelt administration and his role in the founding of the United Nations.

Cordell Hull was born on 2 October 1871 in Olympus, Tennessee. His parents were William Hull and Elizabeth née Riley. His father worked as a lumber merchant and a farmer. Hull attended Montvale Academy, an elementary school in Celina. He studied at the National Normal University in Ohio. Hull was interested in politics from an early age and at the age of nineteen became the chairman of the Democratic Party in his county. In 1891, he graduated from Cumberland University earning a degree in law and passing the bar. In 1893, he was elected to the Tennessee House of Representatives and served there for four years. During the Spanish-American War, he served in the Tennessee Volunteer Infantry as a captain and saw combat in Cuba.

In 1931, Cordell Hull became a United States Senator, and in 1933 he was made Secretary of State by Franklin Delano Roosevelt. Hull headed to the American delegation at the 1933 London Economic Conference. The conference was organized to tackle the effects of the Great Depression which had devastated the world. Hull was also present at Seventh Pan-American Conference in Uruguay. At the conference, Hull put forward the ‘Good Neighbour’ policy for the United States to prevent the spread of Fascist influences in South America. The policy promised that America would not interfere in the domestic affairs of other nations.

In 1939, Cordell Hull advised the president to prevent the entry of 936 Jewish refugees from Germany into the United States. The refugees were passengers on the S.S t Louis and were sent back to Germany where the Nazis killed many. Hull famously met with Japanese ambassador on the day of the Pearl Harbour attacks. Hull maintained contact with the Vichy French government during the Second World War. This communication with the Vichy French was seen as key in aiding the landing of American troops in North Africa during Operation Torch. During the war, Hull was accused of covering up news of the atrocities being committed against the Jews in Europe while America was still neutral.

Cordell Hull attended the 1943 Moscow Conference at which the Allied powers drew up the foundations of the future United Nations. In 1944, Hull resigned his position as Secretary of State due to failing health. He still holds the record as the longest-serving United States Secretary of State. Upon his resignation, he was nominated for the Nobel Peace Prize and was awarded the prize in 1945.

In 1917, Cordell Hull married Rose Frances Whitney. Whitney was from an Austrian Jewish family. The couple had no children. The marriage lasted until 1954 when Whitney died. Cordell Hull died of sarcoidosis on 23 July 1955. He is buried in a tomb at the Washington National Cathedral. The Cordell Hull State Office Building in Tennessee, which holds the Attorney General’s office, is named in his honor.