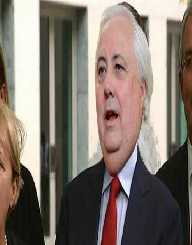 Clive Frederick Palmer is born in the state of Victoria at Footscray Hospital on March 26, 1954. His family lived in working-class Williamstown, a heavily industrialized Melbourne bayside suburb and n the early 1960s, they relocated to the Gold Coast in Queensland.

Clive Frederick Palmer started school at St Mary’s Primary School in Williamstown and was later a pupil at Southport State High School and Aquinas College in Queensland. He spent two years studying law at the University of Queensland but left without graduating (1973-1975).

After dropping out of university, Palmer applied for a real estate license and in an illustrious career acquired a fortune of $40 million. He retired from the real estate in the industry and then became interested in the resource sector. During the 1980s Palmer founded various successful businesses including his flagship company Mineralogy. Other enterprises include Waratah Coal, Queensland Nickel, the Palmer Coolum Resort and Palmer Sea Reef Golf Course.

Palmer’s company Mineralogy leased iron mines to CITIC Ltd., a Chinese government own company, in 2006. The deal was worth almost 3 billion Australian dollars. By 2014 the relationship with CITIC Ltd had soured, and both sides issued lawsuits.

Palmer is also involved in the building of a replica of the RMS Titanic. The plan was for the vessel to be built by CSC Jinling Shipyard in China and was due to be launched in 2016. Launching has been delayed until 2018.

As a National Party of Australia member from 1974 onwards, Clive Frederick Palmer was the party’s campaign director during the 1983 state election and also served as a media spokesman during the 1986 election.

In 2012 Palmer announced that he would be seeking (Liberal National Party) LNP pre-selection for the Brisbane seat of Lilley. This was a seat held by Labor Party member and former treasurer Wayne Swan. Then in April 2013, Palmer said that he would be contesting the Sunshine Coast seat of Fairfax, held at the time by the LNP. He set up the Palmer United Party and in September that year won the place of Fairfax by 53 votes.

Fairfax became the most marginal seat as Palmer shared the balance of power with three other senators. His party won six percent of the vote and two Senate seats at the federal election in November 2013. In April 2014, the Palmer United Party won the third place, but two senators then left the party. After a somewhat turbulent time for the Palmer United Party, in 2016 Palmer announced that he would be retiring from politics at the next federal election.

Clive Frederick Palmer married Susan Parker in 1983, and the couple had two children together, Michael and Emily. Susan Parker died in 2006 from cancer and Palmer remarried in 2007. His second wife is Annastacia Topalov, and they have two daughters, Mary and Lucy.