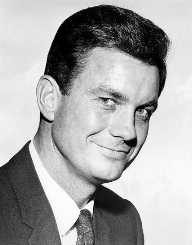 Cliff Robertson attended high school at La Jolla High School.Robertson was mostly bored with his classes, and this prompted him to join in student plays.Cliff was nicknamed “The Walking Phoenix.” Cliff Robertson graduated from high school in 1941. After high school, Cliff Robertson entered the US. Merchant Marine during the World War II. At age eighteen Cliff was reported dead to his family after the Japanese attack on Pearl Harbour.

Upon returning home from the service, Cliff Robertson went to Antioch College in Ohio. There Cliff worked for a local radio station and newspaper. Robertson did not wait to get a degree at Antioch College before he left and moved to New York City. There he began to study at the Actor’s Studio.

Cliff Robertson made his Broadway debut with “Late Love” in 1953. He also began to be cast in television roles like the space opera, “Rod Brown of the Rocket Rangers” which spanned from 1953 to 1954. Other notable television appearances include “Playhouse 90,” “Chrysler Theatre,” “The Wisteria Trees,” and “The United States Steel Hour,” Cliff Robertson made his debut in film with a supporting role in the movie “Picnic (1955)”.

Cliff Robertson's earliest film credits after this include “Autumn Leaves” (1956), “Gidget” (1959) and “Sunday New York” (1963). These were not his proudest moments. Cliff referred to his earliest movie acting opportunities as mediocre.

Things, however, began to look up for Cliff. Cliff Robertson was personally chosen by John F Kennedy to act the 1963 movie PT 109. The film portrayed a young Kennedy as a World War II Lieutenant. Cliff continued on this plane of success with The Best Man (1964), The Honey Pot (1967) and one of his most memorable and successful movies, Charly (1968). Others include Too Late The Hero (1970), The Great Northfield Minnesota Raid (1972) and Obsession (1972).

Cliff Robertson later television appearances include Buzz Aldrin (1976), Washington: Behind Closed Doors (1977) and Ford: The Man and the Machine (1986). And in the movie scene, Cliff was known for playing supporting roles in Star 80 (1983) and Escape from LA (1996). The last movie he was well known for was the move Spider Man (2002). Here Cliff played the Super Hero’s Uncle Ben who was shot dead. He also appeared in the two later installments in flashbacks.

Cliff Robertson tried to get funding and support for a sequel to his Academy Award-winning movie “Charly.” Cliff even went ahead to shoot fifteen minutes of it. This never took off.
Cliff Robertson also did a bit of writing, directing and producing in the movies J.W Coop (1971) and The Pilot Movie (1979).

Robertson's most pursued interest apart from acting was flying. Cliff Robertson's interest in flying began as a thirteen-year-old.Cliff offered to clean airplane hangars for rides. Cliff's piloting skills also got him some advantage as an actor. Cliff Robertson landed the role as a squadron leader in the British war film 633 Squadron.

Cliff Robertson co-founded and chaired the Young Eagles Program from its inception in 1992 to 1994. The goal of the foundation was to educate young people on aviation and fly one million children before the 100th Anniversary of Flight celebration on the 17th of December 2003. They flew the one millionth Young Eagle on the 13th of November 2003. Many of the children had never flown before. On the 28th of July 2016, Harrison Ford flew the two millionth Young Eagle.

Another initiative Cliff Robertson founded was the Cliff Robertson Work Experience in 1993. This was to help young people get flight and ground school instruction in exchange for work.
Cliff Robertson put his flying skills to work for several humanitarian pursuits, which included the organized food and medical supplies flown to Nigeria in 1969 during the Civil war conflict. Cliff Robertson did this as well during the Ethiopian famine in 1978.

In 1977, Cliff Robertson faced the wrong side of Hollywood morality. Cliff reported a case of forgery perpetrated by Columbia Pictures head, David Begelman against the advice of many. Cliff discovered that a check of $10000 had been issued in his name for work he had not done. This led to investigation and uncovering of embezzlement charges against Begelman. David Begelman, in turn, was charged and convicted briefly. Robertson was suspended and fired from Columbia Pictures. However, the damage to his career was short term as he was employed soon after by Metro-Goldwyn-Mayer in 1980.

Cliff Robertson, however, was the one that suffered the most of the repercussions of this scandal.Cliff was blacklisted in Hollywood. Cliff was not cast in any movies for five years until his return in 1983 with the movie Brainstorm. The film was based on the book Indecent Exposure, written by David McClintick an account of the 1977 scandal.

Cliff Robertson was married twice. He first married actress and former wife of Jack Lemmon, Cynthia Stone in 1957. They had a daughter together named Stephanie. They divorced in 1959.

Cliff Robertson was said to have died of natural causes on the 10th of September 2011, a day after his 88th birthday.

In 1968 Cliff Robertson won the Academy Award for best actor for the movie Charly. He has his star on the Hollywood Walk of Fame. He was inducted into the National Aviation Hall of Fame in 2006. He was awarded Ambassador of Good Will Aviation Award by the National Transportation Safety Board Bar Association in 2008.