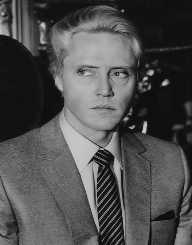 Ronald Walken best known as Christopher Walken is one of America’s most famous actors. Born on March 31, 1943, he is best known for his roles in films like The Dog War; Batman Returns, True Romance, The Deer Hunter, Hairspray and The Dead Zone among many others. Being involved both stage and character acting, Walken has featured in more than 100 films, music video, and TV shows.

The award-winning actor has also played leading roles in Shakespeare's plays like Romeo and Juliet, Macbeth, Hamlet, and Coriolanus. Walken’s hard work and splendid acting skills won him an Oscar for Best Supporting Actor for the film The Deer Hunter.

Walken has also won awards at the BAFTA and Screen Actors Guild Awards. He has also worked as a scriptwriter, film director and a co-guest at the Saturday Night Live. Walken's films are estimated to have grossed over billion dollars.

Christopher Walken was born on March 31, 1943, to Rosalie and Paul Walken in Astoria, Queens, New York. He was named after actor Ronald Coleman. Both parents of Walken were immigrants from Glasgow and Germany respectively. Growing up Walken and his other two brothers stepped into their mother's once dream, acting and becoming famous. They became child actors in the 1950s.

Walken's passion for acting continued to grow and even imitated one Elvis's looks which he has never changed ever since. His continued love for acting grew stronger which made him drop out of the Hofstra University just a year after admission to pick up an acting role. He trained at the Washington Dance Studio to pick some skills in dancing to perfect his parts in musical films and theatre.

Christopher Walken started a career in acting at a young age with playing extras and appearance in some variety shows. He gained a better role as a narrator in the TV show, The Wonderful John Acton in 1953 after an appearance in a sketch on The Colgate Comedy Hour. Walken continued to have a new role as time went on notable among them is Me and My Brother an experimental part. All this while, he also had an active and successful theatrical career. He alongside his brother played a role in The Guiding Light from 1954 to 1956. Walken continued to feature in films like The Lion in Winter in 1963, Hawaii Five-O in 1969.

The 1970s was a perfect decade for Christopher Walken as he started the year with a feature film debut in The Anderson Tapes. Though he played a small role in that, it propelled him to get his debut starring role in the film The Mind Snatcher in 1972. In 1976, he played the part of the fictional poet in the movie Next Stop, Greenwich Village. He also had a role in Annie Hall and The Sentinel in 1977. He concluded the decade with roles in Kojak, 1977 and The Deer Hunter in 1978.

Walken raised the bar of his acting skill The Deer Hunter. His exhibit of talent and astuteness in the film won him an Academy Award for Best Supporting Actor. Having gained lots of recognition and acclamations, Walken started the 1980s with the movie Heaven’s Gate and continued with The Dog War in 1981 and the musical film Pennies from Heaven that same year. Other movies he starred in include The Dead Zone, 1983, Brainstorm, 1983, A View of Kill, 1985, At Close Range, 1986 and Puss in 1989.

His other notable film includes King of New York, 1990, Plain and Tall, 1991, A Business Affair, 1994, Last Man Standing, 1995 and Celluloid in 1996. In the 2000s, Walken starred in movies like The Dead on Broadway, Poolhall Junkies in 2002 won him an Oscar nomination for Best Supporting Actor. Walken's decision never to reject a role unless he is too busy with others is one of the reasons for having a flood of movies to his credit. His movie roles continued to rise in the 2010’s.

In 2010, his role in A Behanding in Spokane gained him a nomination for Best Performance by a Leading Actor in a Play at the Tony’s Award. He appeared in Turks & Caicos and Gyp DeCarlo in 2014. His most recent role in a movie was in the comedy When I Live My Life over Again in 2015. Walken also did the voicing of King Louie of Disney’s The Jungle Book during the CGI-live action. He also sang I Wanna Be Like You, by Louie used as the soundtrack for the film.

Christopher Walken has gained lots of recognition and accompanying awards in for state of the art performances in movies. He is also one of the most accomplished and respected actors of his time. He won an Oscar for Best Supporting Actor with The Deer Hunter in 1978. He has also won BAFTA and award at the Screen Guilders Awards. He is among Empires Magazine’s Top 100 Movie Stars of All Time. He has been praised by several actors and movies critics for his consistency and diligence in the industry.

Walken got himself entangled with the law for the death of Natalie Wood. This was because he was one of the last persons to see her alive before getting drowned at Santa Catalina Island. Wood was on a Thanksgiving boating trip in the area. However, Christopher Walken was said not to be a suspect after the case was reopened in 2011.

Christopher Walken is married to Georgianne Walken also a casting director. They married in 1969 but have not had a child since. However, that seems not to have affected their marriage life as Walken is on record to have said, having no kids is the magic behind his successful career.

Walken was in 2006 rumored to have a presidential ambition by a website. The news spread like wildfire as he came under discussion. However, his publicist later demised the rumors and Walken then stated surprise caught him by that story. Christopher Walken and his wife currently reside in Wilton, Connecticut.