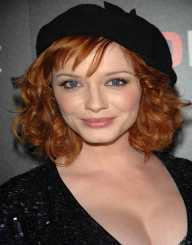 Christina Rene Hendricks was an American actress born on May 3, 1975. She made an acting debut in the television fourth episode of the television series Undressed in 1999 playing the role of Rhiannon and followed it with Sorority that same year. Hendricks came to fame with her role in AMC drama television series, Mad Men as Joan Holloway from 2007 to 2015. After her success in television, she made a film debut in 2007 in La Cucina playing Lily. The awarding winning actress has the following films in her credit, Drive, God’s Pocket, I Don’t Know How She Does It and Lost River. Her most recent work was in the Sundance TV drama series Hap and Leonard as Trudy in 2016.

Christina Hendricks was born on May 3, 1975, in mystery land, Tennessee to Jackie Sue and Robert Hendricks. Her mother was a psychologist her father worked for the United States Forest Service. Since her is a UK citizen, Hendricks bears both UK and US citizenship. The profession of her father demanded they move from one place to the other hence she had her early life in Portland, Oregon and Twin Falls, Idaho. She had her education in Fairfax High School after the family relocated to Fairfax, Virginia.

Hendricks recounts she was a victim of bullying in high school and therefore described herself as an outcast. At age 18, she had the opportunity to sign with a modelling agency after she had entered into a competition to appear on the cover of Seventeen magazine.

Christina Hendricks started a career as a model as a model in New York City since the age of 18. Her acting, however, began in Twin Falls acting in children’s musical theatre productions. She, however, made a professional acting debut in the MTV television series Undressed in 1999. She then made a starring debut in Beggars and Choosers in 2001 and the next to follow was a film debut in La Cucina in 2007. Hendricks has starred in television series The Big Time and The Court playing opposite Sally Field and Craig Bierko. In 2002, she had a recurring role in ER and Firefly.

From 2004 to 2005, Christina Hendricks starred in Kelvin Hill as Nicolette Raye and Cold Case in 2005. He played several guest starring roles in episodes of Angel, Miss Match, Presidio Med, Las Vegas and Without a Trace. In the AMC series, Mad Men, she played the role of Joan Holloway, an office manager in Sterling Cooper & Partners. Her role in the series earned her six Primetime Emmy Award nominations for Outstanding Supporting Actress in a Drama Series. Her film roles also include South of Pico, 2007, Life as We Know It, 2010, The Family Tree, 2011 and the Neon Devils among several others.

Christina Hendricks married actor Geoffrey Arend on October 11, 2009. She revealed in an interview that they have decided not to have children.