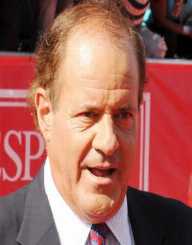 Chris Berman is an American sports commentator, anchor, and host.

Christopher James Berman was born in the town of Greenwich, Connecticut, on May 10, 1955. His mother, Peggy, was a reporter for Time magazine. His father, James, was a corporate executive. His family is Jewish. He spent most of his childhood in the village of Irvington, New York. He studied at the Hackley Preparatory School. In 1977, he graduated from Brown University with a degree in history.

Berman was the sports commentator for the radio station at Brown University. He also occasionally worked for NBC Sports. After he graduated, he covered sports and traffic for a radio station in Waterbury. He then became the weekend sports anchor for WVIT-TV in Hartford.

Berman started working for ESPN in 1979. He stayed with the network for decades, during the course of his entire career. He first served as an anchor of SportsCenter, a program that aired at 3 in the morning. In 1985, he started hosting the Sunday NFL Countdown and the NFL Draft. In 1986, he became a host for the U. S. Open nightly show and he started to cover the Home Run Derby. The next year, he also began hosting NFL Primetime and ESPN Sunday Night Football. In 1990, he became the host of Baseball Tonight and MLB on ESPN.

Berman is known for his catchphrases and for the nicknames he gives the players. During his predictions on the Sunday NFL Countdown, he uses his alter ego called “The Swami”.

Berman has made small appearances in many films and television shows, usually playing himself. He appeared in three films starring Adam Sandler – The Waterboy, The Longest Yard, and Grown Ups 2. He also took part in Necessary Roughness, The Program, Little Big League, Eddie, Kingpin, Coach, and others. He has also appeared in commercials for Nutrisystem, a company for weight loss products.

Berman has received plenty of awards for Sportscaster of the Year. Six of them were granted by the National Sportscasters and Sportswriters Association, three by the American Sportscasters Association and three more by the CableACE Awards. In 1997, People magazine put him on the list of “TV’s Most Fascinating Stars”. In 2010, he got his own star on the Hollywood Walk of Fame.

In 1983, Berman married Kathy Alexinski. They have two children, Douglas and Meredith. In 2017, his wife died in a car accident.