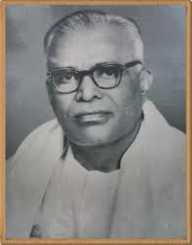 At some point, he was also the Governor of Maharashtra. He got high acclaim following his push for Indian Green Revolution which positively benefited the nation. A considerable increase in agricultural production was experienced during this time, which brought fame to his end. As a result of his notable contribution, he was presented with Bharat Ratna in 1998. This is a prestigious award in India.

Chidambaram Subramaniam was born on January 30th, 1910. His birthplace was in Senguttaipalayam in Tamil Nadu in India. His was the son of an agriculturalist father named Chidambara Gounder. Subramaniam undertook his early studies in Pollachi town before later shifting to Chennai. Here, he enrolled in Presidency College where he later completed his Bachelor of Science degree in physics. He also pursued his law studies at the Madras Law College situated in Chennai.

Subramaniam political inclination began when he was studying in college. During this time, he expressed his strong oppositions against British colonialism. As a result, he joined the Civil disobedience movement. In 1942, he was jailed for participating in the Quit India Movement. By this time, he had earned himself great fame and was voted into the Constituent Assembly. This gave him the opportunity of playing a part in the formulation of Constitution of India. Sooner or later, he was appointed to serve in Madras State as the minister of education, law, and finance. He served in this position for about a decade from 1952 to 1962. While working as the minister during this decade, he was also recognized as the head figure in the Madras Legislative Assembly.

After, he was elected to the House of the People (Lok Sabha) in 1962. He got another duty to serve as the Minister of Steel and Mines. This was followed closely by his role as the Minister for Food and Agriculture.

Chidambaram Subramaniam paired with B. Sivaraman and M. S. Swaminathan in pushing for Green Revolution in Indian ways of agricultural activities. This programme brought a huge change in India followed increased production in wheat during the early 1970s. Around this time, Subramaniam served as the food and agriculture minister. The major changes that he brought were the introduction of highly productive seeds and encouraging farmers to apply more fertilizers while planting crops.

In 1979, Charan Singh appointed Subramaniam as the Minister of Defense. About a decade later, he rose his political ladder to become the Governor of Maharashtra. He acquired this post in 1990. Soon, he resigned from office following criticism from P. V. Narasimha Rao on his way of serving his nation.

Chidambaram Subramaniam tied the knot with Shrimati Sakuntala. They had three children together.

Chidambaram Subramaniam died on November 7th, in 2000. He died at an old age of 90 years.