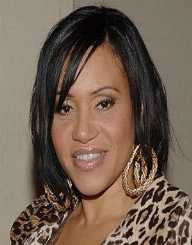 The American rapper, Cheryl Renee James, is mostly known by her stage name Salt. She is one the founders of Salt-N-Pepa an all-female rap group. The famous trio won the American Grammy–award. James later abandoned the group after joining Christianity.

Cheryl Renee James was born on 28th March 1966 in New York. She is the second born child in a family of three children.

Her mother was a banker while her father worked as a transit worker. The three siblings grew up in Bushwick.

Cheryl Renee James enrolled in Grover Cleveland High School where she graduated from the school in 1983. After high school, James joined Queensborough Community College where she studied nursing. It is during her college days when she met Sandra Denton. Their friendship continued after college as they went on to work at Sears as telephone solicitors.

While Cheryl Renee James and Sandra Denton were working at Sears, they met Hurby "Luv Bug" Azor.  Azor asked the two to try their voices in the song.

The two rappers showed potential in rapping, and they immediately took Salt-N-Pepa as their stage name. While working with Azor, they recorded their first album.

James relationship with Azor was more than just professional. For a few years, the two had a romantic relationship.

After recording a few songs that were not received well by the public, Salt-N-Pepa recorded Push It. It was a song done as B-side. The song became a hit in 1988.

Some albums followed their debut album. The use of provocative language in their song made equal fans and haters.

They later released their most famous hit Very Necessary, in 1993. The hit topped the chart in the pop music world. Salt-N-Pepa single None of Your Business won Grammy for Best Rap Performance.

After the release of Brand New, the group started contemplating on a possible break up. James felt she needed to make changes in her life. She had changed her ways, and she thought she no longer suited the group.

The group officially broke up in 2002. Despite the breakup, they occasionally reunite for Salt-N-Pepa special show.  The trio appeared in the television show The Salt-N-Pepa Show which aired between 2007 and 2008.

Cheryl "Salt" James had a romantic relationship with Hurby Azor, the group’s manager from 1984 and 1989. In 2000, James married Gavin Wray after ten years of dating.

The couple has a son, Chapele and a daughter, Corin. The family resided in New York City before moving to Atlanta.